AMD's Ryzen CPUs continue leading the DIY CPU market share in major retail markets around the globe. The Asian Pacific market is one example where we've seen AMD's DIY CPU share cross past 50% over the recent years. The latest figures from Japan are in which show that AMD's Ryzen CPUs retain a comfortable lead over Intel CPUs despite the launch of its 10th Gen Comet Lake desktop family.

The latest DIY Figures comes from Japanese portal BCN Ranking (via Hardware Times) who report that AMD is retained its leading position in the CPU segment despite the launch of Intel's 10th Gen Comet Lake desktop processors. 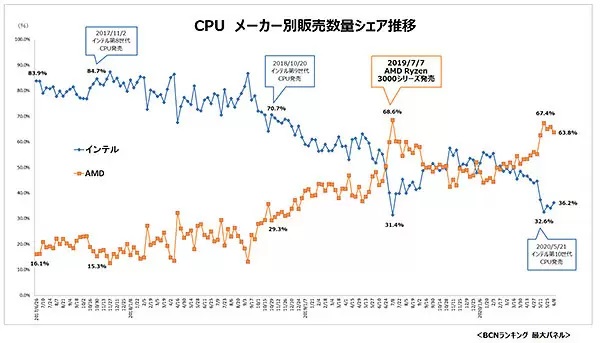 A chart formulated by the tech outlet shows the DIY CPU market share for AMD and Intel CPU. The interesting part is that this share is not specific to a single retailer but is based upon retail channel sales across Japan. The current statistics show that AMD Ryzen CPUs, especially the 3rd Gen Ryzen 3000 series have helped AMD retain a share of 67.4% during the previous month while Intel CPUs amount to a share of 32.6%.

Back in 2017, Intel was enjoying a huge market share of 83.9% in the same market while AMD CPUs only amounted to a share of 16.1%. Looking at the current statistics, the market landscape has not only been reshaped by AMD but even Intel's newest 10th Gen offerings which released last month have yet to capture any significant market share in the Japanese market. According to the BCN, the AMD market share peaked back in July 2019 with a staggering 68.6% share. This was also the same time when AMD released its Ryzen 3000 CPUs on retail shelves. 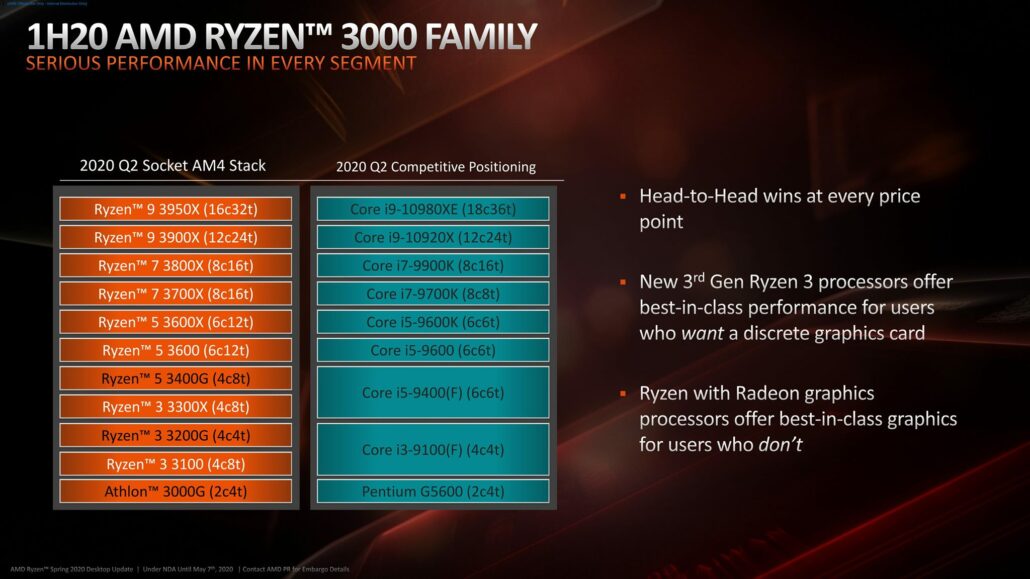 Despite Intel's best efforts, it looks like AMD's Ryzen 3000 CPUs not only hold the value proposition but also the performance crown. This lead in both departments has led to AMD maintaining its big popularity in the Asian regions. Last month, we saw similar reports emerge from the South Korean market too where AMD breached the 60% market share, displacing Intel as the most popular CPU brand and setting an all time high for the red team.

It isn't just the desktop CPU segment that has seen a major increase in market share. Even AMD's notebook CPUs saw a massive increase over the previous quarter, marking a 10 year high for team red in South Korea. Intel has had a strong foothold in the notebook segment until recently when AMD revealed its 3rd Gen Ryzen 4000 'Renoir' Mobility lineup, offering incredible levels of efficiency in a high-performance and high-core count package. AMD has since reported its official CPU share statistics per segment which showcase a huge increase across the board.

With AMD soon refreshing its Ryzen 3000XT processors which will mark another drastic decrease in the prices of existing Ryzen 3000 processors and the imminent arrival of Ryzen 4000 'Vemeer' CPUs later this year, it looks like AMD is all set to surpass its current market share gains worldwide.