AMD Richland Mobile APUs don’t bring anything new to the table as far as architecture is concerned. They are still based off the x86 Piledriver core architecture with upto four modules, improved clock speeds and the Radeon HD 8000 series GPUs are based on the old VLIW4 architecture but yet again offer improved performance from higher clock speeds compared to Trinity. 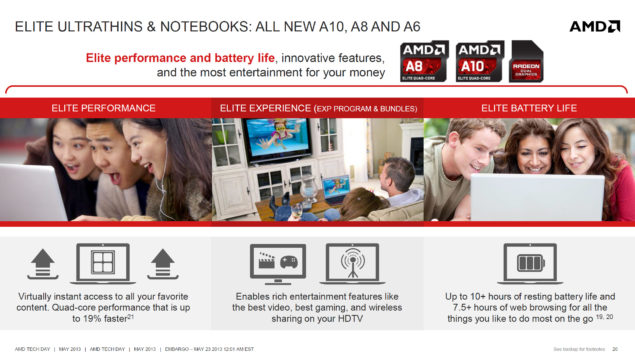 Along with the new features, AMD A10 processors would also get “regionally assorted game bundle” which is part of AMD’s “Never Settle” initiative. We can see games such as Tomb Raider, SimCity and many more to be bundled with the A10 APUs in their respective regions. The A8 series also fall under AMD’s “Elite Experience Program” featuring the entire feature-set minus the game bundle. Going down we have the Richland A6 and Kabini A6 APUs which come without AMD Gesture Control and AMD Face login but other features are included. Last of all are the Kabini A4, Temash A4 and Temash E2 series APUs that only feature AMD Steady Video, AMD Quick Stream and AMD Perfect Picture HD technology.

AMD’s Elite Performance APUs of the Richland Mobile series which include the A10 and A8 APUs come with a wide variety of features that include dynamic performance boost based on the ambient temps of a room. The lower the temperature, the better performance boost you get off your APU. The latest AMD start now technology gives you tablet like responsiveness so you start off your work where you left it or you can in short call it insta-start. The APUs offer compatibility with FS1r2, uPGA and FCH sockets which allow for OEMs to offer various products. The platform supports the latest discrete graphic chips notably the recently released HD 8000M “Solar System” series that included the Radeon HD 8970M “Neptune” GPU. 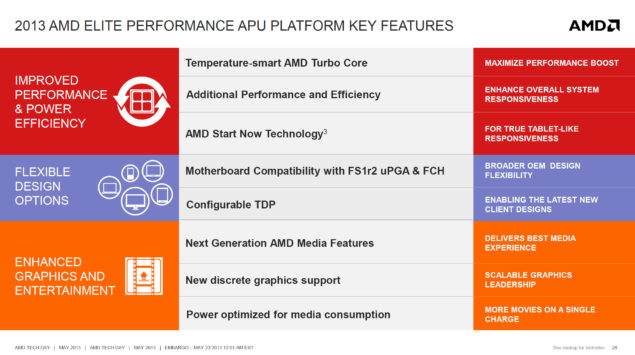 One of the most interesting thing about AMD Richland Mobile APUs is support for Wireless display on Microsoft’s Windows Blue operating system. The wireless chip controller is located on the APU itself and delivers upto 3.9 times better responsiveness over Intel’s WiDi and HD Playback with 1080P 60 Hz. High quality audio playback is also supported by the new wireless interface.

There’s another cool feature known as “Dock Part” which is a device that would be bundled by specific OEM manufacturer’s or can be bought separately to be connected to any notebook that comes with a Richland Mobile “Elite APU”. The dock allows you to run upto four external displays and several peripheral devices through USB 3.0 ports all through a single Richland mobile notebook. With this, users can enable AMD Eyefinity gaming with any Dock enabled notebook and 3D Steroscopic display and gaming while the USB 3.0 can allow connectivity with DVD/Blu-Ray, HDD, Smartphones and Mouse/KB.

Next up are even more performance slides that compare the Richland Mobile APUs to Intel’s Low voltage Core i3 and Core i5 processors. In gaming titles such as Batman Arkham City (DX11) and 3DMark Firestrike, AMD takes the lead. Battery life and OpenCL performance is much better than Intel’s offering.

AMD calls the Richland Mobile APUs as a true gaming platform and we can already see the A10-5750M delivering from 39% upto 97% more performance in various titles compared to the Core i5 3210M which comes with a HD 4000 series GPU core. 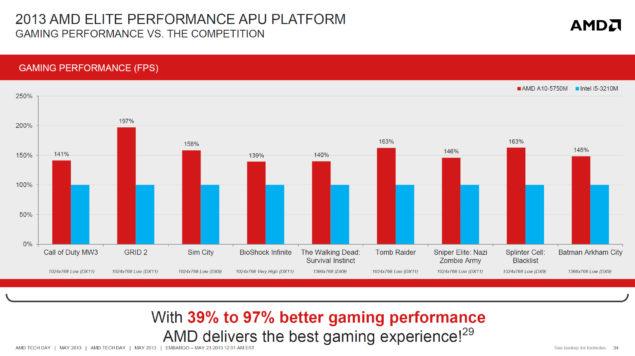 What’s even better is that AMD’s Richland Mobile APUs while comes with a fast HD 8000 series GPU can also be paired with a similar discrete graphics solution with which users can gain upto 55% performance boost in gaming. Following chart shows the improvement when an AMD A10-5750M gets paired up with the HD 8750 discrete GPU that can be equipped on supported notebooks. 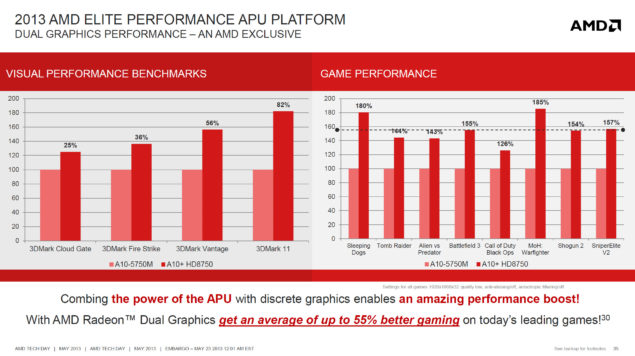 The AMD Richland Mobile APU lineup can be seen listed below, do note that the notebooks equipped with these APUs are now available globally. 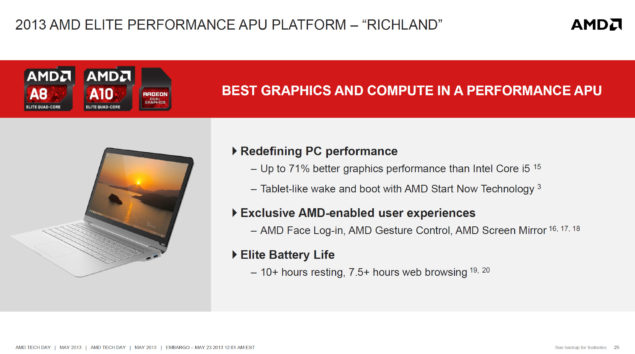 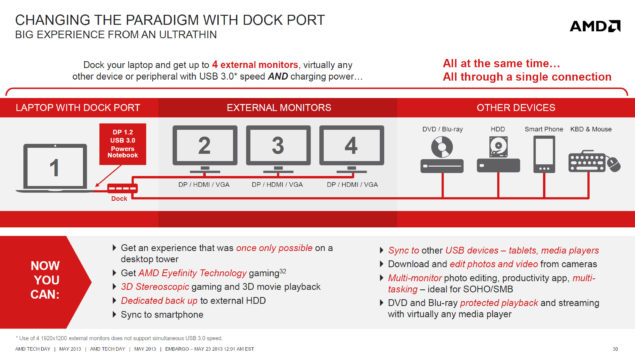 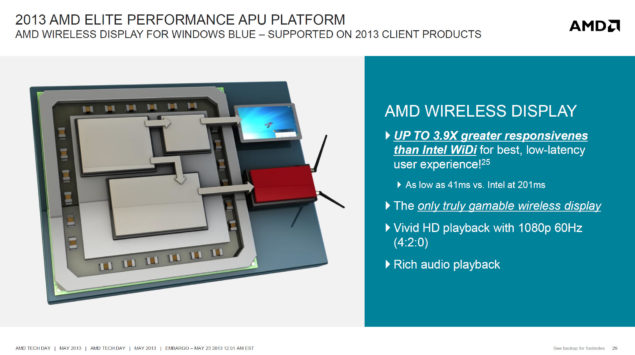 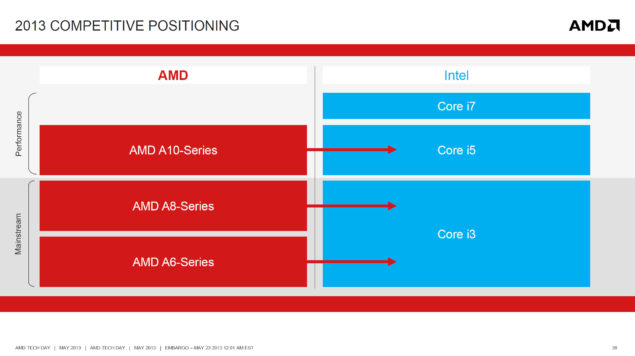 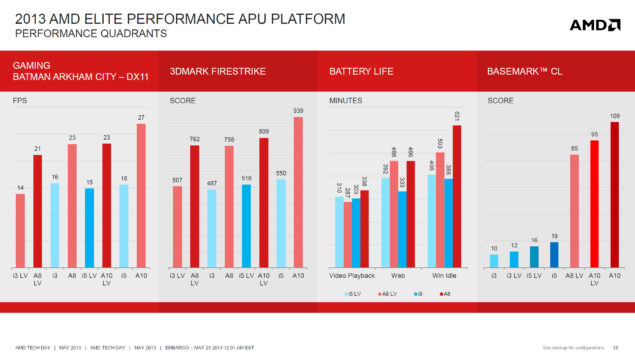 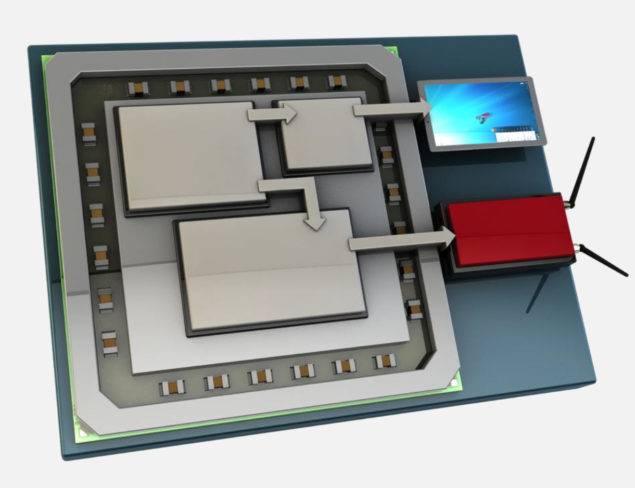