AMD is soon going to introduce their latest Godavari APUs which are based on a refreshed Kaveri design. MSI including several motherboard manufacturers have not only released the latest UEFI Firmware for their FM2+ boards which will allow support for the upcoming APUs but also released refreshed FM2+ motherboard lines which will allow users on the existing FM2 boards to get a decent upgrade path towards Kaveri and Godavari generation of APUs. 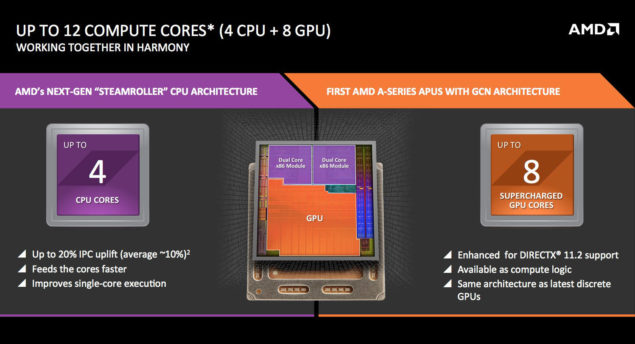 The launch of Godavari APUs is marked for 28th May but we have already seen several leaks regarding the line up and their specifications since they can be seen listed on motherboard support lists of several board makers. These details point out that the new Godavari APUs are basically featuring a more efficient design over Kaveri that leads to higher clock speeds gain that is in most cases around 100-200 MHz on both CPU and GPU side. In fact, Godavari is to Kaveri what Richland was to Trinity and that implies to a more tweaked design. The reason for AMD not bringing anything new to the table on the desktop front could be the fact that they have Carrizo manufactured in limited quantities to only meet mobility demand. Since there are not enough Carrizo chips to make their way to desktop at the moment, AMD just refreshed their existing lineup to offer something new to desktop users. The bulk of the new updates for desktop consumers are planned for 2016 when AMD launches their next generation x86 Zen architecture and a new APU lineup called "Bristol Ridge".

We are still far from 2016 so let's take a look at what's coming in the near future. While ASRock and Biostar are releasing UEFI firmware to add support for Godavari APUs, MSI is launching a slew of new motherboards that include the:

The motherboards listed above feature Military Class IV designs and come in Mini-ITX and ATX form factors. The motherboards feature the socket FM2+ which supports Godavari, Kaveri, Richland and Trinity processors. The ITX offering comes with on-board wireless AC module and can support overclocking on K-series unlocked APUs. The Godavari APU lineup will include several new chips which will be launched under the A-7000 and A-8000 series branding. Japanese site, GDM.OR.JP mentions that the 8000-series will be used for OEM only PCs while the A10-7870K and A8-7670K will be launched for the consumer platforms. Specifications of these chips can be seen at the end of this article.

Some features are listed by MSI in the press release below:

MSI, world leading in motherboard design, is pleased to announce the launch of 8 new AMD FM2+/FM2 socket based motherboards supporting the latest AMD Godavari APU. These new models are available in ATX, micro-ATX, and mini-ATX form factors and are backwards compatible with FM2 processors (Kaveri, Richland, Trinity, 6000 and 5000 series). MSI has packed these models with a rich blend of features and technologies, such as onboard LAN, PCI Express 3.0 x16, SATA 6Gb/s, USB 3.0 and multiple display support, offering the most stable and most cost-effective solution available.

MSI's new A88X, A78 and A68H based motherboards are available in different form factors and offer a great choice in connectivity with a RAID controller, onboard LAN, PCI Express 3.0 x16, SATA and up to 10 USB ports.

The core of Military Class 4 is based on the essential elements which increase your stability in the most extreme conditions. Humidity- and high temperature protection ensure system stability in any environment, no matter what. The new structure of the PCB limits EMI emission. On top of that, all connectors have ESD protection to prevent short-circuiting.

The MSI A68H series motherboards are equipped with many exclusive technologies, including the one-second overclocking tool OC Genie 4, the easy to use Click BIOS 4 and the Command Center software that combines features such as monitoring, tuning and controlling of your hardware. The unprecedented level of flexibility and control offered in MSI's unique hard- and software design puts you in the driver's seat of your motherboards configuration. via MSI