The latest data from Germany's largest retailer, Mindfactory.de is in and shows almost no change in AMD's dominant position during October 2019. AMD's Zen architecture took over the majority share from Intel in very early 2018 and well over two years later, there has been little to no change in its dominant position. With a 78% share of the number of CPUs sold, it's hard to imagine a time where AMD used to be so uncompetitive.

AMD Ryzen R5 3600 6 Core/12 Threads Processor Was The Most Popular Processor In October 2019 at Mindfactory.de

AMD Matisse, or the Ryzen 3000 series processors, have proven to be truly phenomenal in getting their teeth into the CPU market share. With AMD having a distinct process advantage over Intel, and the economies of scale of a lower node kicking in, david has now become the goliath. AMD has succesfully shown that there is a market for high end parts with more cores in the PC DIY industry and this is something Intel hopes to replicate soon with their upcoming Cascade Lake X CPUs.

Intel's Cascade Lake X CPUs will be launching on the 25th of November 2019 and will result in a 50% slash in Intel's per-core pricing. This pricing would beat AMD's 2nd generation of processors, but not the upcoming 3950X which will take back the crown. That said, the 50% price cut will certainly make Intel's HEDT lineup competitive once again for DIY users who are willing to pay the premium for higher clocks. 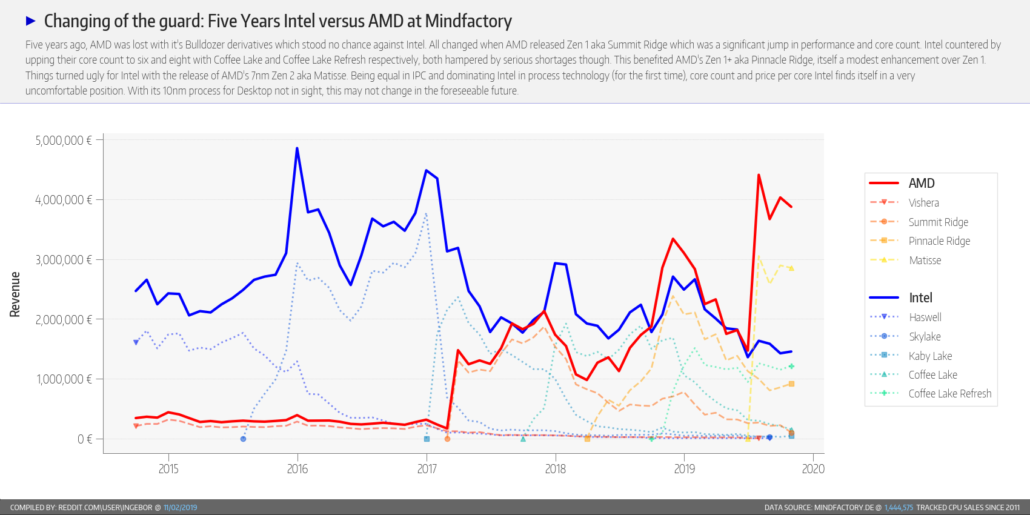 If you take a look at the graph above, you will see that AMD's market share truly skyrocketed with the introduction of Matisse. This was the final nail in the coffin and turned the fight from a on-again, off-again victory to a clear and distinctive win. The contrast to pre-2017 and post-2019 levels is really astonishing and a tribute to the leadership of Lisa Su. The complete mind factory report is given below:

In my personal opinion, Intel should be able to better its position with price cuts since it has a lot more margin to play with but will not be able to take back its leadership position till they are able to catch up on the process node. Till then, they will need to get agressive with price cuts and improve their performance/$ position if they want to retain their existing market share. Their 14nm process is incredibly mature and this is something which can be used to their advantage - although it has the caveat of making the transition to 10nm incredibly difficult because of the sudden decrease in clock speeds that will inevitably happen.

There also seems to be some ambiguity regarding Intel's 10nm desktop parts landing and there are rumblings (read: unconfirmed rumors) that Intel might decide to go directly to 7nm. This would make sense from a lot of angles since 7nm would be based on EUV and appears to be much easier than fixing 10nm, not to mention would help remedy some of the lost lead time. Here is what Intel had to say about the 10nm desktop timing:

Intel has reached out to the publication with a clarification on the release date. While its 10nm desktop chips are in the works, it has not yet announced a specific timing for its desktop products. IT World Canada