AMD has shown off two high-performance demos of their Radeon RX Vega and Frontier Edition graphics cards at Computex 2017. The demos were featured on a high-end X399 HEDT platform that was powered by a 16 core Ryzen Threadripper processor.

While AMD isn't sharing more details on their gaming focused Radeon RX Vega graphics card, they did test it in a live gaming demo which we will talk about in a bit. In terms of launch timeframe, the AMD Radeon RX Vega has been officially confirmed to launch on Siggraph 2017 which begins on 30 th July. So that's a whole month after the Radeon Vega Frontier Edition which launches next month on 27th June.

Radeon “Vega” Updates
Following the announcement that the first graphics card based on the “Vega” architecture will be the Radeon Vega Frontier Edition, a premier solution for both machine learning and advanced visualization, AMD announced that this powerful new graphics card is expected to arrive on shelf on June 27th, 2017. In addition, AMD showcased the highly-anticipated Radeon RX Vega graphics card, asserting that the “Vega” architecture based gaming powerhouse is expected to launch at SIGGRAPH 2017, the world’s largest and most influential conference for computer graphics and interactive techniques, hosted in Los Angeles, California. via AMD

The second demo was performed on dual AMD Radeon RX Vega graphics cards with 4096 SPs on each card (arranged in 64 CU). This card was shown running Prey at 4K in Ultra settings. AMD's RX Vega demonstration was also performed on a Threadripper platform, running a 16 core, 32 thread processor. The frame rate was uncapped and no V-Sync was used since there was visible tearing during the demo. AMD has announced that Radeon RX Vega graphics cards will be arriving in late July or Siggraph 2017 which means we have to wait two more months for Vega.

The Radeon Vega Frontier edition is the only card which provides details on the specs for the upcoming Vega GPUs. 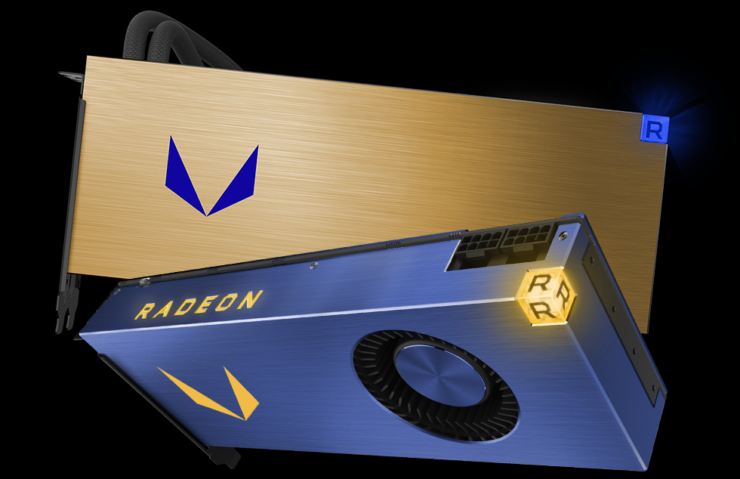 In terms of specifications, the card comes with 4096 stream processors and clocked beyond 1550 MHz to deliver 13 TFLOPs of FP32 and 25 TFLOPs of FP16 compute performance. There’s also 16 GB of HBM2 VRAM which comes in two stacks (8 GB per stack). The graphics card has a total rated bandwidth of 480 GB/s which is lower than 512 GB/s on Fiji. It also features pixel fill rate of 90 GPixels/s.

AMD Radeon Vega Frontier edition will be available in June in two variants. One would be an air cooled model which comes in a nice blue industrial texture with a glowing yellow “R” emblem placed in the corner. The graphics card come with a “Radeon” label and logo on the sides and front. The back is covered by a nice blue texture backplate. The whole card is powered by a dual 8-pin connector configuration which confirms a TDP around 300W. The card is cooled by a single blower style fan that throws air out of the I/O side exhaust vents.

The second card has also been shown and comes in a brushed golden texture on the shroud. It features the same logos but those come with blue LED lighting. The card is exactly the same aside from the fact that it will feature liquid cooling as shown by the tubing extended out of the front. Some features aside from the looks of the card include:

It was nice to see the Radeon RX Vega graphics card running a gaming demo once again but I personally think the launch is set too far away. The Radeon Vega Frontier edition launches one month earlier but it has been mentioned that the card isn't entirely purposed for gaming. The users waiting for Radeon RX Vega will have to wait two more months to get their hands on the Radeon RX Vega series of graphics cards.