So as you might have seen by now, AMD has a special card for a wide range of consumers. This card will be called Radeon Vega Frontier edition and as with the name, AMD isn't focusing this at any particular market. In general, this card will fulfill the needs of a wide range of consumers who want to be the first to get their hands on professional grade Vega solutions as soon as they are available.

The Radeon Vega Frontier edition is planned for launch in June 2017 so we can expect more details prior to that at Computex, where AMD is expected to host a keynote on 31st May. In terms of specifications, the card comes with 4096 stream processors and clocked beyond 1550 MHz to deliver 13 TFLOPs of FP32 and 25 TFLOPs of FP16 compute performance. There's also 16 GB of HBM2 VRAM which comes in two stacks (8 GB per stack). The graphics card has a total rated bandwidth of 480 GB/s which is lower than 512 GB/s on Fiji. It also features pixel fill rate of 90 GPixels/s.

We’ve spent years preparing to enable this next generation of data scientists, immersion engineers, and product designers, by designing a formidable new GPU architecture – Vega – from the ground up, and by heavily investing in machine learning, high performance graphics for content creators, and open software solutions to deliver value to a broad pioneer ecosystem. Today our vision for delivering the future of data science and advanced visualization materializes with the release of the Radeon™ Vega Frontier Edition graphics cards which will be shipping in late June. via AMD 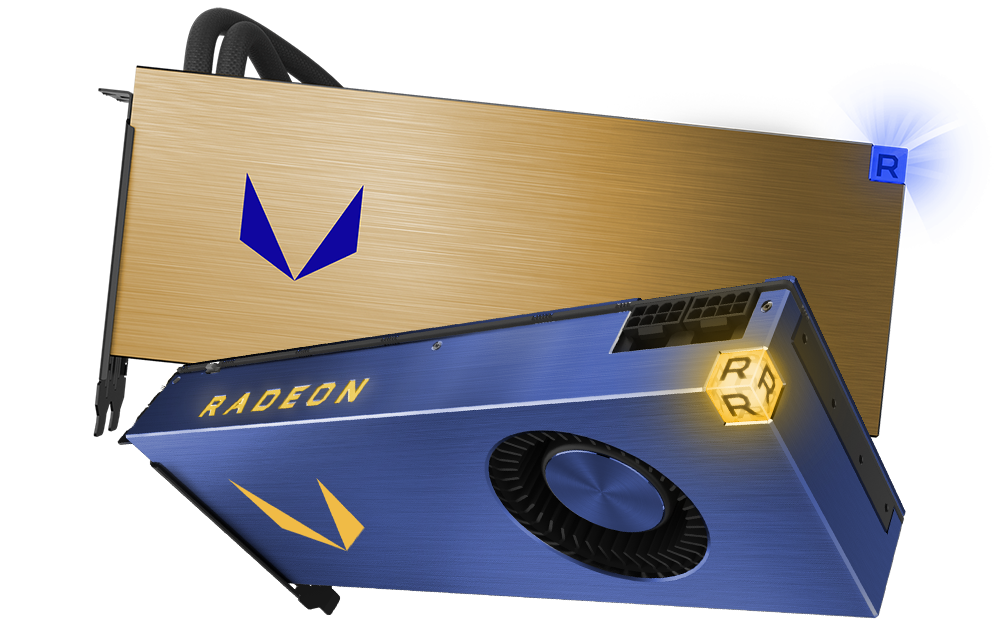 AMD Radeon Vega Frontier edition will be available in June in two variants. One would be an air cooled model which comes in a nice blue industrial texture with a glowing yellow "R" emblem placed in the corner. The graphics card come with a "Radeon" label and logo on the sides and front. The back is covered by a nice blue texture backplate. The whole card is powered by a dual 8-pin connector configuration which confirms a TDP around 300W. The card is cooled by a single blower style fan that throws air out of the I/O side exhaust vents.

The second card has also been shown and comes in a brushed golden texture on the shroud. It features the same logos but those come with blue LED lighting. The card is exactly the same aside from the fact that it will feature liquid cooling as shown by the tubing extended out of the front. Some features aside from the looks of the card include:

The technology allows AMD to feature large flash memory (M.2) on the graphics board along with the local memory that the GPU can send large data sets to directly rather than having it sent over the system memory which has slower processing capabilities. The card uses a Vega chip which makes sense since it is a very beefy card with a lot of processing power. Power is provided through an 8+8 pin configuration.

During the world’s first demonstration of a Radeon Pro SSG solution, 8K raw video timeline scrubbing was accelerated from 17 frames per second to a stunning 90+ frames per second. As content creators rapidly adopt 8K resolution to future-proof their content, a 5X performance boost will improve quality of life, productivity and efficiency in the editing process. Expect more information about these cards at Computex 2017 which is just two weeks away.