The first alleged specifications and performance numbers of AMD's Radeon R9 390X flagship graphics card have been leaked ahead of NVIDIA's GTC 2015 event tomorrow. The slides leaked by Videocardz show that the AMD Radeon R9 390X is shaping up as a brute performance part by the red team who are aiming to launch it a few months after NVIDIA's GeForce GTX Titan X. 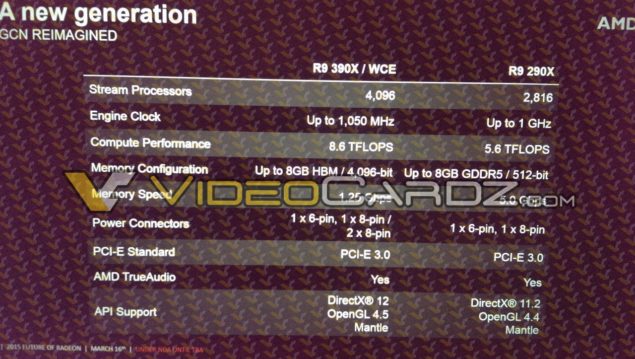 AMD's Radeon R9 390X is based on the Fiji XT graphics core which will be replacing the Hawaii based Radeon R9 290X. The Radeon R9 290X was launched back in October 2013 making it almost a year and a half since we last saw a flagship graphics card launch from AMD. Many of the slides posted by the source give back hints at codenames and specifications which we had already detailed such as the "King of the hill" codename that was used internally by AMD as a reference to the Radeon R9 390X and some specifications which we have been reporting since the past few months.

The AMD Radeon R9 390X is going to be a very high-performance product as can be seen by the specifications being reported. First of all, the Radeon R9 390X will rock a massive 28nm die (just like the Titan X) and feature a tremendous 4096 stream processors (unified cores) along with 256 Texture Mapping Units. The ROPs amount is not known but it could be anywhere between 112-128 if the current GCN architecture (Tonga derivative) is taken in account. The core clock speed for the card is expected around 1050 MHz which gives the card around 8.6 TFlops of compute performance (this is not taking in any architectural improvements) and the card will receive power through either a 6+8 Pin or dual 8-Pin configuration which suggests it's quite indicative that the card will be power hungry and AMD is yet to decide a final configuration before the card hits retail. The card will support the same DirectX 12 API tier as currently supported by Maxwell which was not available on previous GCN cards along with full support of OpenGL 4.5 and Mantle API.

The more interesting update given in the leak is that AMD might indeed be shifting to 8 GigaBytes  of HBM implementation which means they will be able to equip 8 Gb capacity per DRAM die and up to 2 GBps speed per stack layering in the future in addition to 4 GB HBM variants which will feature 640 GB/s. This will allow AMD to ship the card in both 4/8 Hi Stack variants or 4 GB and 8 GB models as reported yesterday. The models will still ship with a maximum bandwidth of 640 GB/s while AMD will be looking forward to ship the faster 1 TB/s next year once NVIDIA's Pascal is close to launch since that is allowed through Gen2 implementation which will be ready by SK Hynix next year for mass production. 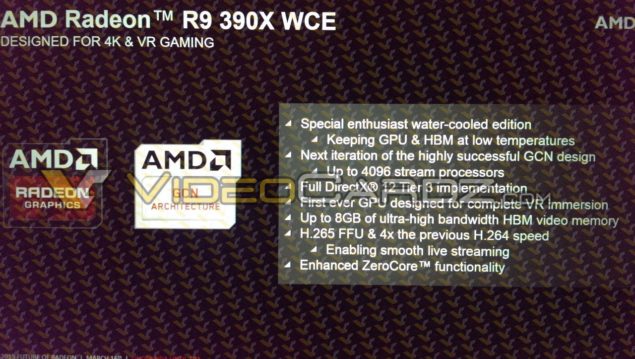 As detailed yesterday, the Radeon R9 390X will be available in reference, custom and special AMD built models. The specific model, codenamed Radeon R9 390X WCE will feature a similar water cooling design as the Radeon R9 295X2 graphics card which will leverage overclocking and performance due to the temperatures staying under control. The exact details of the models are not known but will be available for a higher price than the reference models if it is ever available to consumers and not a special case that is to be sent only to reviewers. 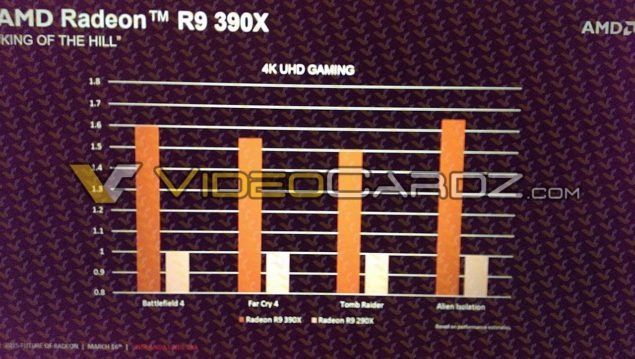 One thing is for sure, when it comes to performance figures, AMD knows how to deliver on amazing speeds knowing about the competition that lies ahead. Having an edge by evaluating the GeForce GTX Titan X, AMD will have the Radeon R9 390X up and running with speeds of up to 60% faster graphics performance in titles such as Battlefield 4, Far Cry 4, Tomb Raider and Alien Isolation in 4K Ultra HD gaming. Those are amazing figures and we cannot wait to show a comparison of both flagship cards when they launch in the months ahead. You can check the slides for more information below and over at Videocardz.