AMD’s Radeon Pro Duo has officially launched with a price tag of $1500. The GPU houses two full-fledged Fiji GPUs with a total of 8196 stream processors and 8GB HBM (memory). The card prominently features FireRender and LiquidVR - which is AMD's purpose built platform for VR content. The dual-GPU monster has an MSRP of $1500 and should be hitting the shelves right about now.

The card is a multi-piece aluminum and nickel construction with a glowing LED Radeon logo. The board houses a dual BIOS switch for software redundancy and features closed loop liquid coolers from Cooler Master. The radiator cooling down the twin GPUs present on the board is a 120mm Nidec unit. The graphics card requires a whopping 3 8-pin connector array for a power consumption of 350 Watts (which is pretty decent considering a single Fury X sips around 275W). The on-board memory is of course 8GB of HBM. According to the marketing material provided by AMD the card is 1.5x faster than a Geforce GTX Titan X (which is a single GPU based graphics card) and 1.3x faster than the older R9 295X2 it succeeds.


As far as benchmarks go, the GPU scores an easy 11 on the Steam VR bench and while most reviews aren’t up yet, preliminary benchmarks are very hopeful. AMD has been focusing on power efficiency with the Radeon Pro Duo and this is readily apparent in the official benchmarks. The 8GB worth of High Bandwidth Memory especially shine in high resolutions like 4K where the 4096 bus width starts to make a difference. AMD has also been working on GPU scaling, which thanks to its FireRender technology is as high as 1.7x (in professional environments). You can find a detailed breakdown over here.

[Third party reviews will be added here as they become available]

The Radeon Pro Duo, so far, holds the title of the most powerful graphics card. One of the primary criticisms leveraged at dual-GPU graphic cards is that they are working in what is essentially Crossfire. Which means that the scaling is not what a single GPU setup with twice the specifications would offer. In the case of VR however, things are different. Unlike in 2D, VR requires simultaneous outputs to two screens (one for each eye). With some very clever software engineering (and underlying hardware support on the Fijis), Liquid VR allows devs to gain close to 100% scaling on VR applications.


AMD has been focusing a lot on the VR industry with this generation of GPUs and it aims to make VR within the reach of more consumers (by increasing the total available market). Running virtual reality headsets such as the Oculus Rift and HTC Vive requires quite a bit of horsepower, which in the case of the Oculus Rift is 2k resolution at 90 frames per second. This graphical horsepower can be produced by GPUs equivalent (or more) in power to the GTX 970 or the Radeon R9 290. However, as we up the visual fidelity, maintaining this standard gets very hard, and this is where the Radeon Pro Duo and LiquidVR combo come in.

LiquidVR is a set of technologies that has a very clear mission: to take maximum advantage of GPUs to enable rich and seamless content.

As VR technology evolves, so will LiquidVR – we have a robust road map that will tackle a wide range of issues the industry already talks up as the next set of challenges we’ll be facing. We believe that with LiquidVR, AMD has helped the industry to take a first big step in this wonderful new immersive world called virtual reality.

LiquidVR will continue to drive hardware and software technologies that will ultimately lead to the nirvana of VR: 16K/eye, 144Hz and above refresh rate, and virtually no latency, all in a wireless, small form factor package - AMD's Guennadi Riguer in an interview to Wccftech. 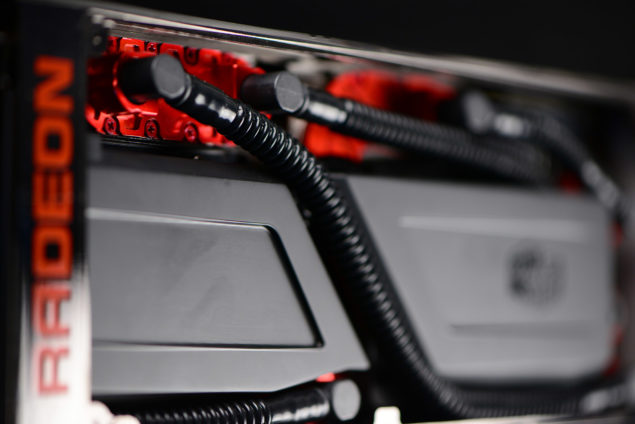 The Radeon Pro Duo will be able to leverage LiquidVR (exposed in DX11) and DirectX 12 to offer an incredible platform for VR content across all major setups. With over 16 TFLOPS of FP32, it can easily handle VR workloads better than any other single graphics card setup out there right now. The Oculus Rift and HTC Vive have already started rolling out and this GPU is the perfect single graphics card solution to power them. If Dual-GPU is not your thing, or you don't have the budget for it, AMD will be launching the Polaris 10 and 11 GPUs this year which should offer the "minimum VR spec" at a much more affordable level. Here are the final specifications of the AMD Radeon Pro Duo graphics card: