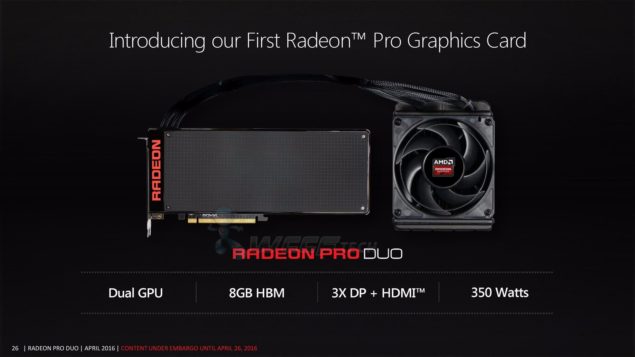 The Radeon Pro Duo comes with dual Fiji GPU cores that are clocked around the same specifications as the Fury series cards. The Radeon Pro Duo comes with two Fiji XT cores (128 compute units), each chip comprising of 4096 shaders that adds up to 8192 on the card itself. Each core has 64 raster operation units and 256 texture mapping units while the core clock is maintained up to 1000 MHz.

With the mention clock speeds, the Radeon Pro Duo has a total of 128 ROPs and 512 Texture Mapping Units which deliver 512 GT/s texture fill rates and 128 GP/s Pixel Fill rates. The card is a beast designed  to power 4K gaming and professional content and features AMD's Liquid VR and FireRender technologies for the best app-level support. 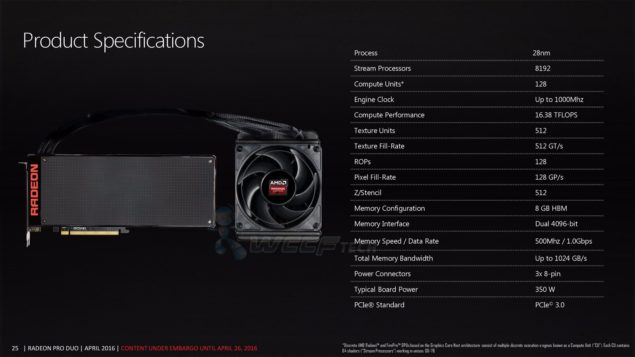 The specifications of the Radeon Pro Duo reveals its several TFLOPs of crunch power!

This allows the card to deliver 16 TFLOPs of 32-bit single precision compute which is currently the highest any graphics card could offer. The dual Fiji GPUs really form a great duo as a FP32 oriented compute card but at the same time, lacks FP64 hardware which isn’t available on Fiji GPUs. 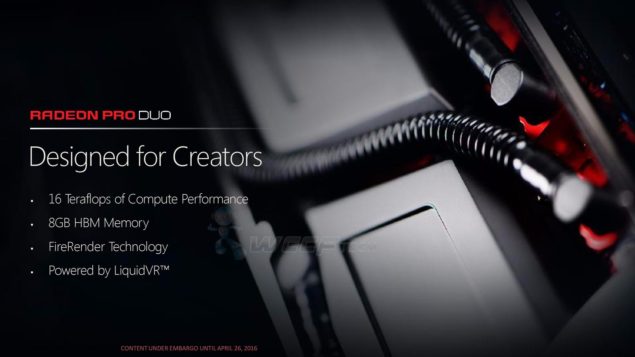 AMD stated that Radeon Pro Duo is built for creators who game and gamers who create!

The AMD Radeon Pro Duo is a really fast graphics card and as such requires three 8-Pin PCI-Express power pins to boot it up. The TDP of the card is 350W which is around the same wattage we should expect from dual-chip cards. Display outputs include four Display Port connectors. The card will be retailing at a price of $1500 US on 26th April. Do note that the AMD Radeon Pro Duo will have limited shipments and thus availability will be low since this is a special enthusiast-grade product. 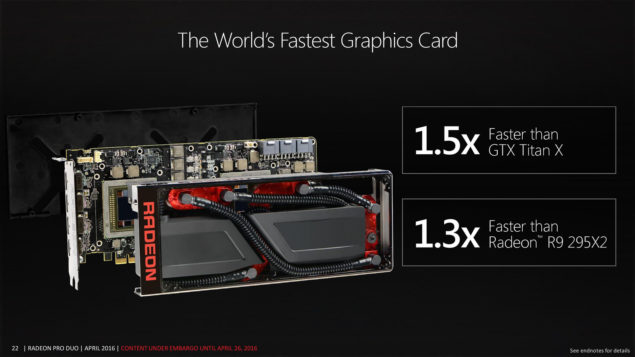 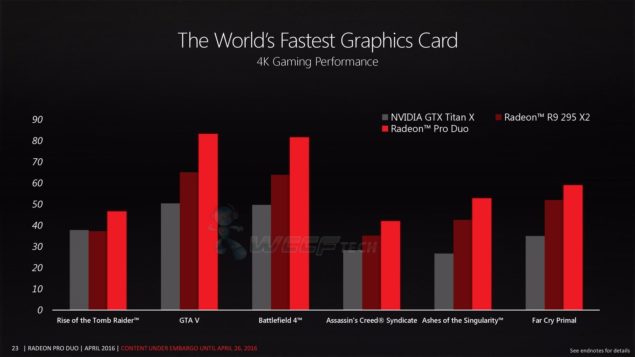 Some performance metrics of the Radeon Pro Duo against the R9 295X2 and the Titan X.

AMD has developed one of the best software driver suite for the Radeon Pro Duo which will allow users to choose from a blend of both gamer and professional drivers. Initially, the card will work with games and has optimized multi-GPU support for AAA titles that support the technology. Later, AMD plans to add windows certification (WHQL) along with workstation class stability and application certification. 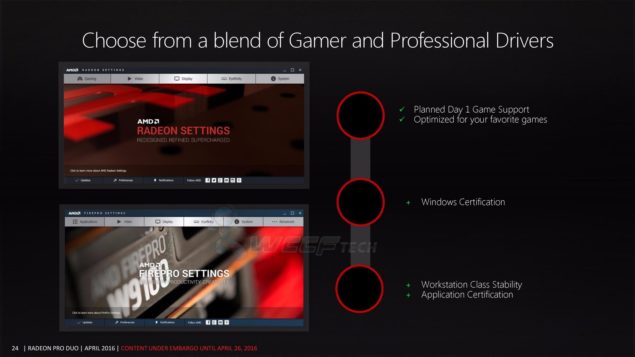 Under specific workloads, the Radeon Pro Duo's entire 8 GB VRAM buffer will be utilized which is also being worked on the driver side. It should also be noted that AMD later plans to release such drivers for high-end cards such as the Fury series.

AMD patched up with Cooler Master to develop the water cooling solution for the Radeon Pro Duo. While it has been little talked about, the cooling solution has to be one of the best looking designs ever created. The AIO water block and pump fitted underneath the GPU shroud is absolutely fantastic. The finish on the card is really sweet and the cooling system should run just as silent as the Fury X and AMD must have given special attention to the components to eliminate any coil whine which was an issue with recent cards. 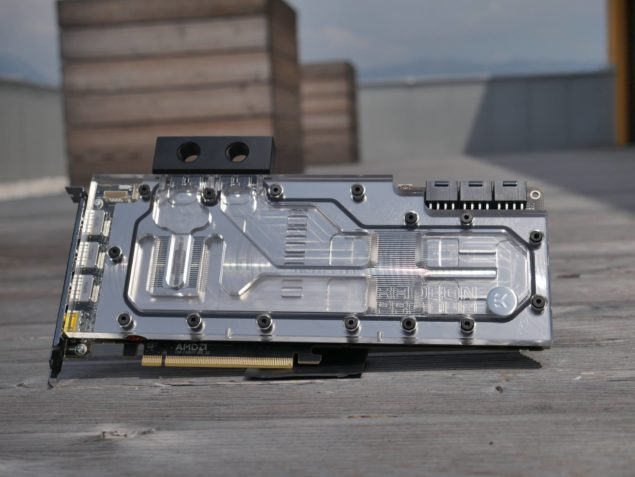 EK Waterblocks, known for their masterful works in the water cooling industry have already designed a water block (full cover) for the Radeon Pro Duo graphics card which looks insane. We will see the card in its true form when it officially launches on 26th April 2016.