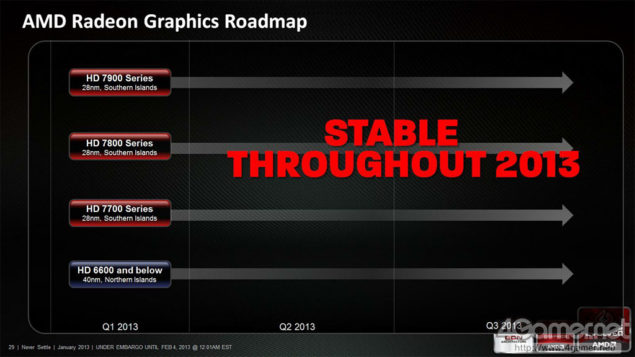 Some fresh details on AMD's Radeon GPU strategy for 2013 have arrived from HardwareCanucks which confirm that AMD would launch new HD 7000 series products in 1H 2013. Additionally it has been confirmed that AMD won't launch its new architecture based GPU lineup for desktop till Q4 2013.

On its Solar System HD 8000M forefront, AMD would unleash a new Radeon HD 8970M featuring the new MARS chipset that would be built using the latest GCN core architecture. It was hinted during the Radeon HD 8000M reveal that the Sun and Mars based HD 8000M parts would launch a bit late in Q2 2013 but would be based off the true successor to GCN architecture featuring much better performance per watt. As for Oland, the chipset would currently be used on the HD 8600M chips and entry level desktop parts acting as a replacement to VLIW4 based HD 7600 GPUs.

The true successor to the Southern Islands Radeon HD 7000 series would only show up in Q4 2013. We believe that AMD would do a paper launch of their new GPUs around December 2013, the Radeon HD 7970 was paper launched on December 2011 and launched on January 9th 2012. Nevertheless, we are looking forward to new developments on AMD's GPU sector, their new Never Settle Reloaded bundle is looking great and the Catalyst Never Settle updates have brought AMD's driver support nearly upto GeForce driver equivalent. But with NVIDIA launching a mammoth "GeForce Titan" GPU in the upcoming week, AMD would have to redeem themselves soon to take back the flagship crown from green team.