New details on AMD's Pinnacle Ridge CPUs and Raven Ridge APUs have just been leaked. The new report confirms several details that we have been hearing about the upcoming processor lineups from AMD and their launch schedule.

The latest details come from leaked roadmaps which were posted on a Chinese site (via Videocardz). The roadmap confirms the Pinnacle Ridge and Raven Ridge processor families. We got to know about the new Pinnacle Ridge family just a few days ago. From the looks of it, we will actually get to see Pinnacle Ridge in 2018 while Raven Ridge would be headed to several mobility platforms in 2H 2017.

Little is known about the Pinnacle Ridge lineup but one thing is for sure that enthusiasts and enterprise users will be looking at even more performance compared to the first generation Zen core. The roadmap confirms that the Pinnacle Ridge CPUs will features up to 8 Zen CPU Cores. We are definitely looking at the Zen 2 revision here which we will talk about in a moment.

The processors will have TDPs up to 95W which is similar to their current Ryzen lineup. All chips will feature support for DDR4 memory. The AM4 platform will provide support for Zen, Zen 2 and Zen 3 based CPUs up till 2020.

Given the overall IPC increase, we could be looking at anywhere from 60-65% total IPC increment over Excavator with Zen 2 which is a huge leap in performance. AMD might also sort out some issues that they are currently facing with optimization in gaming applications, compatibility with higher clocked DDR4 memory and lower CPU clock speeds. Improvement in process nodes with return better yields and chips that are clocked higher than the current SKUs.

The roadmap also showcases Raven Ridge which is AMD's new APU based on the Zen core architecture. AMD has stated that while Raven Ridge is the family name, all SKUs will be branded as Ryzen chips and will be heading for launch in 2H 2017. The roadmap also claims the possibility of Raven Ridge featuring enhanced Zen cores which could leverage from some enhancements that would later be adopted by the Zen 2 cores in the Pinnacle Ridge family. 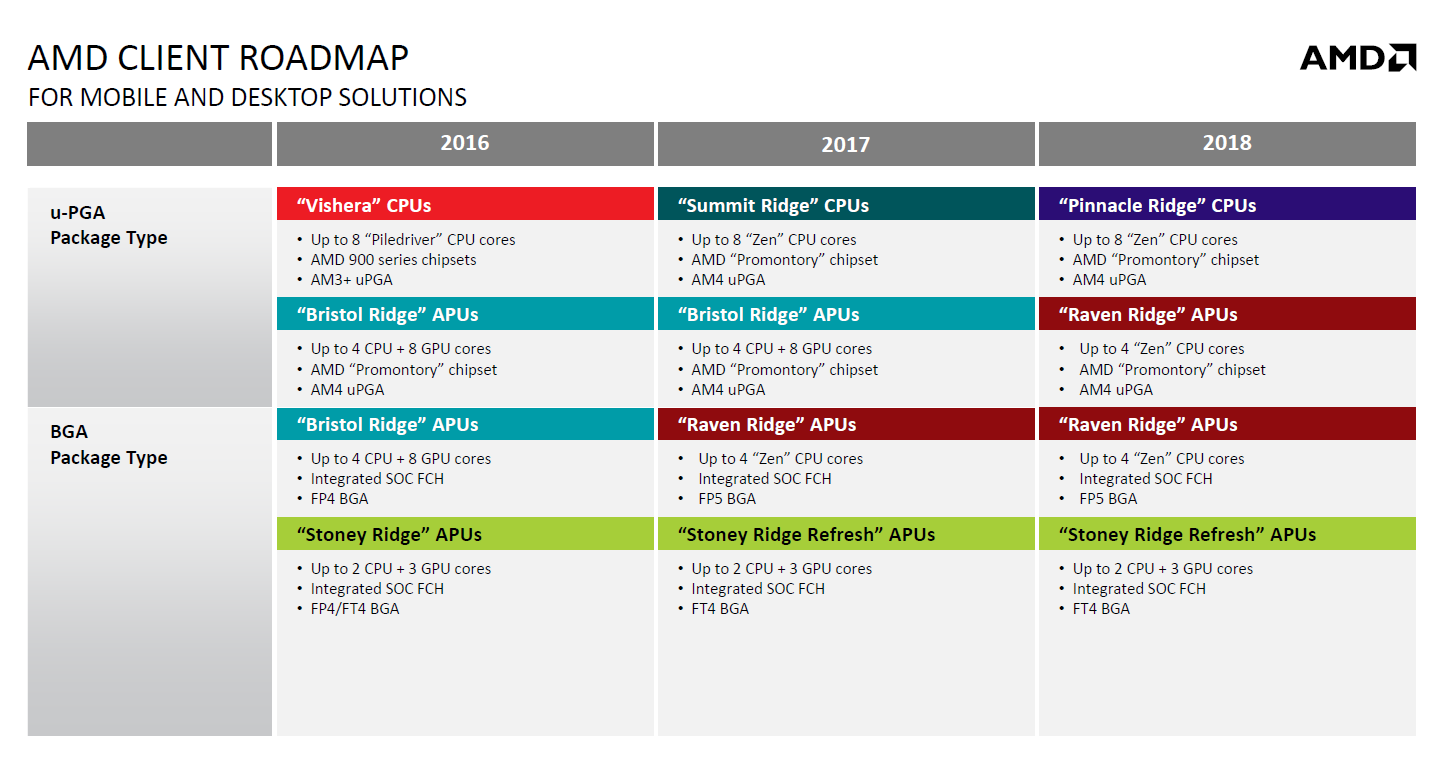 On the GPU side, Raven Ridge will feature the brand new Vega GPU architecture. A total of 11 Vega GPU cores are featured on Raven Ridge. This rounds up to 704 stream processors which is a nice increase over 512 cores on Bristol Ridge. These small Vega cores would help boost the performance of integrated graphics processing on such chips. We can expect prices for these chips under the sub-$250 US range.

AMD has also confirmed that Raven Ridge SKUs will have a range of quad core variants with SMT enabled (4 core / 8 threads). Just like Pinnacle Ridge, Raven Ridge would be compatible with AM4 and support the DDR4 memory. AMD looks very strong with the current product roadmap and they have some really cool stuff coming out in the next few years.