Another set of AMD APU Processors have been leaked and detailed. The new CPU's include the  C-60, E-300 and E-450 which will aim towards the notebook segment offering lower power consumption while giving top of the line performance which is detailed below. We reported another Llano Fusion chip “A8-3530MX” which will be AMD's fastest APU (Accelerated Processing Unit) till 2012.

All Processors are manufactured using a a 40Nm Process and consists of C and E series Llano chips. The C Series consists of the C-60  chip while the E-Series includes E350/E450 Processors. Moving on to details, The C-60 will be a Dual core chip consisting of two cores running at a clock speed of 1Ghz (Brazos Platform) which can Turbo up to 1.33Ghz featuring 1MB L2 Cache. The chip will feature Radeon HD 6290 which will include 80 Stream Processors and unlike the 6250 Graphics chip it would be able to utilize Turbo Core technology bumping the GPU clock speed from 276Mhz to 400Mhz. The chip consumes a total of 9W TDP.

The E-Series consists of the E-450 Llano chip which is the fastest APU belonging to the E-Series. Consuming a total TDP of 18W, It delivers a base clock of 1.65Ghz W/O Turbo Boost, 1MB L2 Cache. The main difference between the E350/E450 would be that the graphics core "Radeon HD 6320" featuring 80 Stream Processors would be able to use Turbo core technology unlike the E-350. The boost will allow from 508 to 600Mhz. DDR3 Memory support is included in both chips.

AMD also plans to release a E-300 chip which consumes the same 18W TDP, Core clock would be set at 1.3Ghz (Dual-Core) and will include integrated "Radeon HD 6310" Graphics with core speed of 488Mhz. Not only this but an F-Series processors "F-350" is most likely to be released by Q3 2011 while the ones detailed would be released in September. 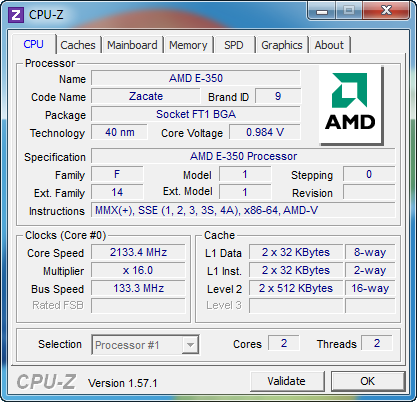