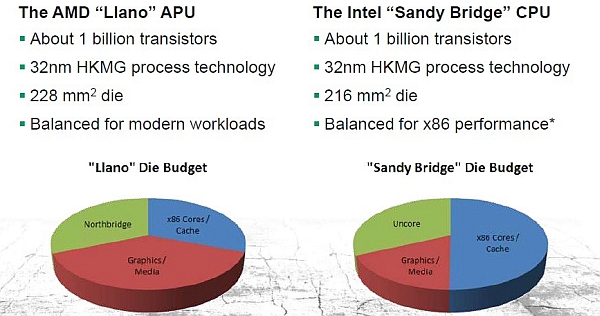 AMD's upcoming line of Fusion based Llano APU's (Accelerated Processing Units) will feature embedded graphics solution which include a Radeon HD 6550 Graphics Core. The Llano chips will compete against Intel's current LGA 1155 Sandy Bridge Lineup which consists of quad core chips featuring a HD 3000 series Integrated Graphics Processors. The Llano chip will come with the silicon part of the GPU integrated with the rest of the APU which includes the x86 cores whereas the Intel CPU's come with a fused with a integrated graphics northbridge onto a single die alongside the processor die.

The new Llano chips which will include the HD 6550 core include A8-A8-3550 and 3550P which are Quad Core processors and a thermal design power of 100W. The graphics core of the HD 6550 chip will be clocked at 594Mhz featuring DX11 Graphics and upto 400 Stream processors, Memory is shared from the Main Memory however AMD might plan to work on Side Port based memory. Also, The HD6550 can work alongside a discrete graphics solution from AMD' s Turk based chips HD 6570 and HD 6670 "Turks" with the help of Hybrid Crossfire X, While doing so the Graphics core would be recognized as "Radeon HD 6690".

You can also check out following posts which show head to head comparisons of the Llano chip with Intel's top of the Line Sandy Bridge CPU's: