The last AMD announcement for today is the new x86 Piledriver CPU refresh which includes the FX-8370, FX-8370E and FX-8320E processors. The new FX CPU refresh comes four months after Intel launched their very own Haswell Refresh lineup which includes the Devil's Canyon processor. Rather than focusing on performance, AMD targets Intel with their brute pricing model which offers users a 4.4 GHz clock chip with 8 Cores at a low price of $199.99 US. 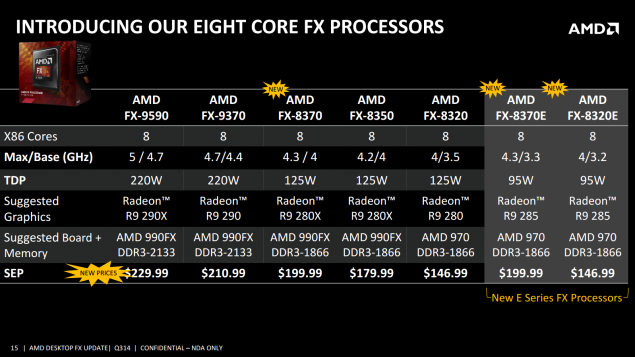 Back at the Radeon event held last week, AMD demonstrated a live overclocking preview of the FX-8370 processor where renowned overclocker "Chew" from Xtremesystems overclocked the chip past 8 GHz and even got to see a overclock world record of the FX-8370 a few days from overclocker "The Stilt" who had the chip clocked at an impressive 8.7 GHz on liquid nitrogen cooling. The show detailed nothing else regarding the FX processors but we already had received information on the new refresh chips prior to event so let's do a quick run through of what we are looking at today.

Let’s get started with the FX-8370 now which will become the flagship x86 Piledriver processor of the original FX-8000 lineup until AMD plans to launch a new processor line (hopefully no refresh). AMD does have steamroller but they aren’t focusing it towards the high-end desktop market instead focusing it towards the APU market with their Kaveri APUs and Athlon processors. The FX-8370 is clocked at 4.30 GHz base and 4.40 GHz boost clock and ships with a 8 MB L3 cache, 8 cores. 125W TDP and a price of $189 US. The FX-8370E on the other hand has the same specifications aside from the 3.3 GHz core and 4.3 GHz clock speeds maintaining a TDP of 95W. Both the FX-8370 and FX-8370E are priced at $199.99 US.