Well we we got some pretty interesting documents from our friends over at Planet3d forums. The documents are AMD's Optimization Guide and shows a new 16 core processor with 8 CUs. This could prove to be a worthy successor to the FX series though it would naturally fit in the Opteron series too. 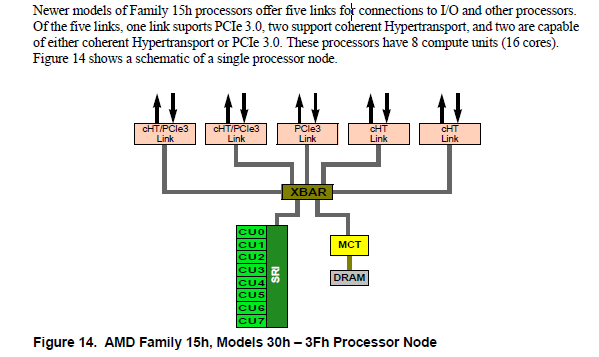 Abu Dhabi (AMD's previous Opteron ) also had 16 cores but that was a MCM (Multi-Chip Module). This is a single silicon and single die design which is clearly more efficient than AMD's last offering. Using HyperTransport Tech this processor  will be capable of 4P (64 Cores) and should be a very attractive option for render farms and the server market if AMD plays its cards right. Abu Dhabi and the upcoming Warsaw are both MCM (Multi Chip Modules) which refers to the multiple silicons on a single die.

You can see the 4 HyperTransport links in the diagram, this means that if you have a mother board capable of 4P (4 sockets) this would actually total to a 64 Core system. It also features one PCI-e 3.0 Link (3 if you are not using the two optional HypT). The Modules are all connected via a System Request Interface and the central data bus connects the same to the DRAM. This is a very simple and barebones diagram of the upcoming processor and each CU consists of two Alsen Units, a floating point unit, shared L2 Cache and a front end.

We do not have specifics about the Architecture, but the L1 cache size would put it at Steamroller. Interestingly It would also allow AMD to put one foot into Intel's Xeon Phi (Coprocessor) Niche which features 72 Cores for a total of 3 Teraflops of Processing Power (D.P.).