AMD Might Be Developing Next Generation APU With x86 Cheetah and ARM Cores – Features GCN 2.0 Cores and HSA+ Support

A few weeks ago, AMD announced their ambidextrous roadmap which introduces their K12 architecture and Project Skybridge aiming to bridge both ARM and x86 cores. The new architecture is aimed towards servers, shown in the roadmap but a similar architecture would be headed to consumers in the form of mobility and desktop APUs. 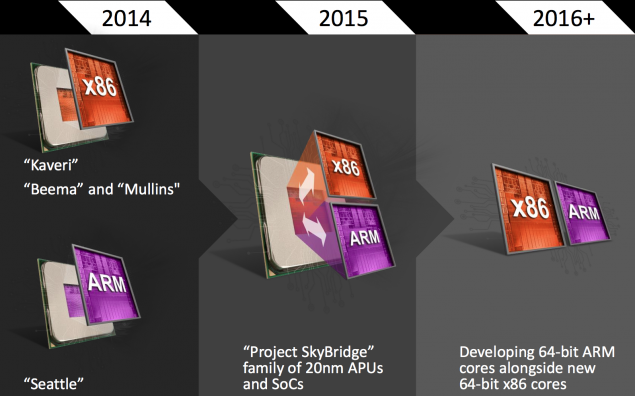 We have received information from a highly credible source working close to Global Foundries in the process of manufacturing AMD APUs and next generation of hardware. As we all know, AMD is bridging the gap between ARM and x86 moving into future generation cores and their latest Kaveri APU which uses the Steamroller 28nm architecture is the first to adopt HSA (Heterogeneous System Architecture).

According to the source, details about Excavator are already known by the masses and the architecture itself isn't as special as it was once believed to be. Like Steamroller before it, Excavator would more likely be an evolution to the x86 architecture rather than a revolution in terms of process design and performance improvements since its based on the same 28nm mode with little changes to the core and would be adopted by the upcoming Carrizo cor based accelerated processing units.

From the looks of it, AMD is already developing the successor to their PUMA+ cores which are technically a refresh of Jaguar with better performance per watt. Its true successor would be called Cheetah which is the next generation x86 core architecture which will launch between 2015-2016 close to K12. The Cheetah core architecture will be based on low power cores since its the successor of PUMA+ but would also include some interesting new tech such as ARM cores and GCN 2.0 architecture.

Moving in 2016, AMD would unveil their next generation K12 ARM Core which will be exclusively developed by AMD for AMD and feature the latest 64-bit ARM cores elevating 64-bit ARM performance to new levels. These K12 ARM APUs/SOCs will be developed alongside new 64-bit x86 Cores from AMD for their current non-ARM APU lineup.

This new ARMv8 CPU core which has been codenamed K12 is being developed under the leadership of chip guru Jim Keller. In an earlier report, Lisa Su (SVP and General Manager of Global Business Units) did mention that they will be going 20nm in 2015 and FinFET after that so its pretty clear that AMD’s K12 core would be based on a 16/ 14nm FinFET process.

Since x86 Cheetah is planned for launch at the same time, it could also follow the same FinFET process technology or AMD could retain the 20nm node they will use on Cambridge CPU in 20nm of low-power server SOCs and APUs.

Regardless of the process design, AMD's x86 Cheetah architecture would introduce new technologies geared towards compute. It is clearly mentioned that AMD's x86 Cheetah cores won't be enough to power compute needs which the APU is geared towards, hence for each CPU core there would be one dedicated 64-bit ARM core that analyses the incoming tasks & offloads them to the GPU. This is obviously not as efficient as running tasks that are using OpenCL (or any GPU acceleration), but it works with every application so even older programs like an old video editor or a pure CPU benchmark will use the GPU to do most of the work.

The x86 Cheetah core architecture would also be highly scalable with different products in 2, 4, 6, 8 x86 core variants. Since each CPU core has one dedicated ARM core, we are also looking at 2,4,6,8 ARM cores on the x86 Cheetah based APUs. The single-threaded performance of these next-generation APUs would be better then past generation cores since the ARM cores would be able to offload tasks to the GCN cores while the other cores stay in idle state to conserve power.

The Cheetah based APUs would be geared towards consumers first and hence it will feature GCN 2.0 graphics core architecture. The amount of GCN 2.0 cores is the multiple of the amount of x86 cores which essentially means that an 8 Core model will have 8 x86 Cheetah cores, 8 ARM cores and several GCN compute units which will span the low-end mobility to the most high-end desktop SKUs. The Athlon equivalent of the core would adopt around 128-384 GCN processors while the high-end variants can include upto 1024 stream processors and clock speeds of around 900-1000 MHz. The specifications for SKUs aren't finalized yet but we are looking at a top-to-bottom SKU lineup featuring the Cheetah and GCN 2.0 core design.

The APU will give the ability to set the maximum amount of GPU cores being used for GPGPU computing through AMD drivers because the more GPU cores assigned to help the CPU, the less cores will be available for the "real" GPUtasks, although a "dynamic" scaling system is in planning as well. AMD has also developed a bypass for GCN cores which can now be used coherently with a discrete graphics card. Previous generation APUs disable the iGPU when the system is running on dedicated graphics except for a few Dual Graphics solution options available on the Radeon R7 lineup. With Cheetah APUs, this limitation will be bypassed an all integrated GCN 2.0 cores would be scheduled to handle GPGPU computing while the dedicated GPU will work along side to handle GPU tasks. 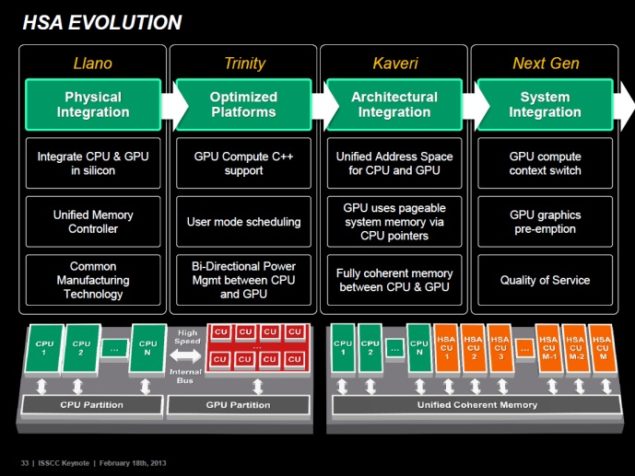 AMD is also allegedly planning to introduce HSA+ solution or Advanced HSA on their next generation x86 and ARM based APUs. The new HSA set will enable that all x86 cores, ARM cores and GPU cores would be able to share the main memory in a coherent manner rather than just the main x86 cores and GPU.

The x86 Cheetah cores and APU are currently under research and development phase and it would be some time before they see the light of day and most probably under a different name. But the recent ambidextrous project roadmap highlights that AMD is giving a strong emphasis to APU and SOC featuring both ARM and x86 cores on the same die and that is where their future lies.

The source was also keen to share details that AMD is very well planning a new x86 high-performance core which will mark the return of FX series in 2015-2016 with much better performance obtained through an architecture built from the ground up and that GCN 2.0 architecture is coming this year. We have an article on that coming up soon but the details mention that GCN 2.0 is not much powerful in terms of GPGPU computation but provides a huge jump in power efficiency. So the next two- three years for AMD really sound great and stay tuned for more information.