AMD has officially launched their latest Bristol Ridge processors for a new generation of mobility platforms. The new processors are part of AMD's 7th generation A-series APU family which will be available on FP4 platforms which includes laptops, notebooks and a many more mobile products. The APU family will power a range of new products while being based on a fine tuned 28nm process node which has its DNA from last year's Carrizo APU.

Today, AMD is launching their mobility platform first which would soon be followed by the full fledged desktop platform. The mobility APUs will be featured in several laptops ranging from low-power to high-end solution. All solutions will feature the latest AMD Radeon M400 series mobility graphics chips. These next generation APUs will be delivering higher battery life and faster performance with an updated architecture.

“We know that consumers want more for their money than ever before – sharper graphics, faster performance, and longer battery life. We have focused on working with key OEM partners to develop outstanding computing platforms that will fully take advantage of the powerful 7th Generation AMD APUs,” said Jim Anderson, senior vice president and general manager, Computing and Graphics Business Group, AMD. “I’m excited that consumers will start to see some of these fantastic systems come to market so soon. I’m very proud of the exceptional AMD engineering execution that enabled us to accelerate these exciting new products into the market for our customers and end users.” via AMD

One of the main changes that Bristol Ridge brings to the notebook market is a new memory controller. While Carrizo supported DDR3L/LPDDR3 memory types on the notebook side, Bristol Ridge will feature an improved DDR4 memory controller making this the first AMD notebook series to support the new memory standard. The Intel Skylake generation of processors unveiled in Q3 2015 already feature support for DDR4 memory on both notebooks and desktops. AMD also had DDR4 support for Excavator based APUs and chips on the embedded market but this is the first time they will be bringing DDR4 to the mobility sector.

We mentioned about several key technologies that have been incorporated in Bristol Ridge to make these APUs more efficient than Carrizo on an existing process node. With these enhancements, AMD manged to extract 10 percent better IPC from their excavator cores compared to Carrizo APUs. Compared to Kaveri, the total compute throughput has improved by 50%. But better performance doesn't mean that we would get lower battery times on new products. AMD actually managed to cut off power consumption by 12% solely due to the the frequency at which it takes to complete these tasks.

What We Know About the Bristol Ridge Family So Far

Both Bristol Ridge and Carrizo APUs are based on a 3rd generation GCN architecture (GCN 1.2) which is the same version incorporated on the Fiji and Tonga GPUs. Both APU families have full support for DirectX 12, provide great audio, UVD, VCD, DCE features and support Dual Graphics, Panel Self Refresh, Dynamic Bezel Adjust along with the ability to run up to 3 simultaneous displays. 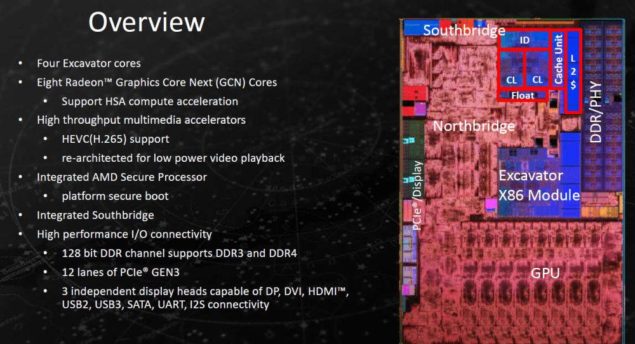