According to 4Gamer.net, The Next Generation AMD Bulldozer Enhanced Processors (Komodo Series) would be compatible with the current AM3+ Platform. The Upcoming AMD Bulldozer CPU's would be supported by the AM3+ Socket Motherboards feature the SB950 + 990FX Chipset. By making the Komodo CPU's compatible with the same socket, AMD would increase the longevity of its AM3+ Platform. 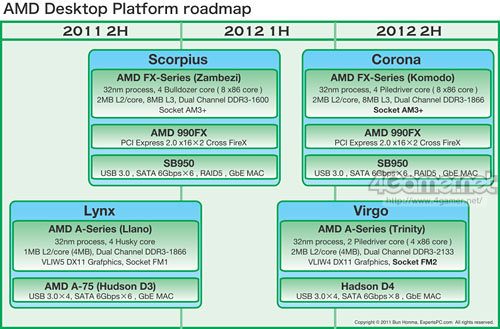 The Komodo CPU's are part of AMD's upcoming Corona Platform which would include 32nm Piledriver (8 x86 Cores) Chips which would be supported on the AM3+ Socket motherboards with 990FX Northbridge and SB950 Southbridge chipsets. The new CPU's would arrive in 2H 2012, AMD's Bulldozer is also gearing up for launch this month which we detailed earlier here.

AMD also plans to release its Trinity based APU's (Accelerated Processing Units) in 2H 2012. The Roadmap shows the AMD would release a new FM2 Platform for these chips. The new Trinity APU's would be made up of 4 Bulldozer Cores and would allow for 2133mhz DDR3 Memory Support. Also the new APU's are rumored to feature AMD's HD7000 Series Integrated Graphics processors (Detailed here). You can check out the links below for more info on AMD's Upcoming Bulldozer/Komodo and Trinity chips: