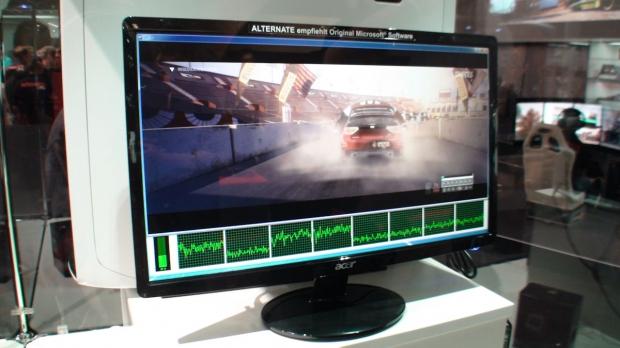 An AMD Bulldozer 8 Core Processors has been spotted at GamesCom 2011 Event which is underway in  Cologne, Germany.

The CPU rumored to be a "Black Edition" Bulldozer Chip was seen running over at AMD's booth paired up with a ASUS Crosshair Formula V Motherboard (Detailed here). The chip was running on Stock clocks equipped with the Factory Air Cooler and a few Bulldozer Tin Packaging boxes were also seen laying around the booth. You can get more details on the Retail Packaging in the link below:

The Bulldozer rig was also seen running Codemaster's Dirt 3, The Task Manger was kept open to show the CPU usage of 8 Total Cores of the Bulldozer chip. You can check out the Video Below:

The CPU could either be an FX-8130P or FX-8150P Bulldozer Chip since both of these fall under the Black Edition Branding detailed in the links below: