AMD has just announced that it will be holding a press conference on June 1st at Computex for its upcoming Polaris & 7th generation APUs. The event will be held in Computex Taipei in Taiwan. Speakers include AMD's President and CEO Lisa Su as well as AMD's head of the Radeon Technologies Group Raja Koduri in addition to the company's head of the CPU & APU side of the business, Jim Anderson.

A real-time video webcast of the event will be accessible on AMD's Computex page (www.amd.com/computex) and on AMD's Investor Relations home page (ir.amd.com). A replay of the webcast can be accessed a few hours after the conclusion of the live event on both pages and will be available there for one year after the event.

Journalists in Asia allegedly received invitations just a few days ago to a Polaris 10 launch event at what appears to be the same Computex venue. AMD is promising to reveal more details about Polaris on June 1st, the extent of which has not been made public just yet. What we're likely going to see is AMD announcing Polaris products at Computex then following it up with a product launch event at E3.

AMD has built somewhat of a tradition of introducing new products at E3. We've seen the company introduce products at E3 on more than one occasion in the past few years. The HD 7990 and FX 9000 series spring to mind. More notably, last year the company hosted the E3 PC Gaming Show which included the Radeon 300 series and Fury X launches. It's been confirmed earlier in this year that the PC Gaming Show will be returning in 2016.What we do know for sure now that the company has confirmed it is that Polaris will definitely launch in June.

Bristol Ridge and Stoney Ridge both belong to AMD’s 7th generation APU line-up that the company announced last year at its Financial Analyst Day event. The 7th generation of AMD APUs will forgo the aging FM2+ and AM3 sockets in favor of an all new platform based on AM4 socket. A socket that these chips will share with AMD’s hotly anticipated high-performance Summit Ridge family of CPUs.
Summit Ridge is AMD’s upcoming FX family of enthusiast/high-end desktop CPUs featuring AMD’s brand new high performance x86 CPU core “Zen”, the development of which was spearheaded by the legendary CPU architect Jim Keller. 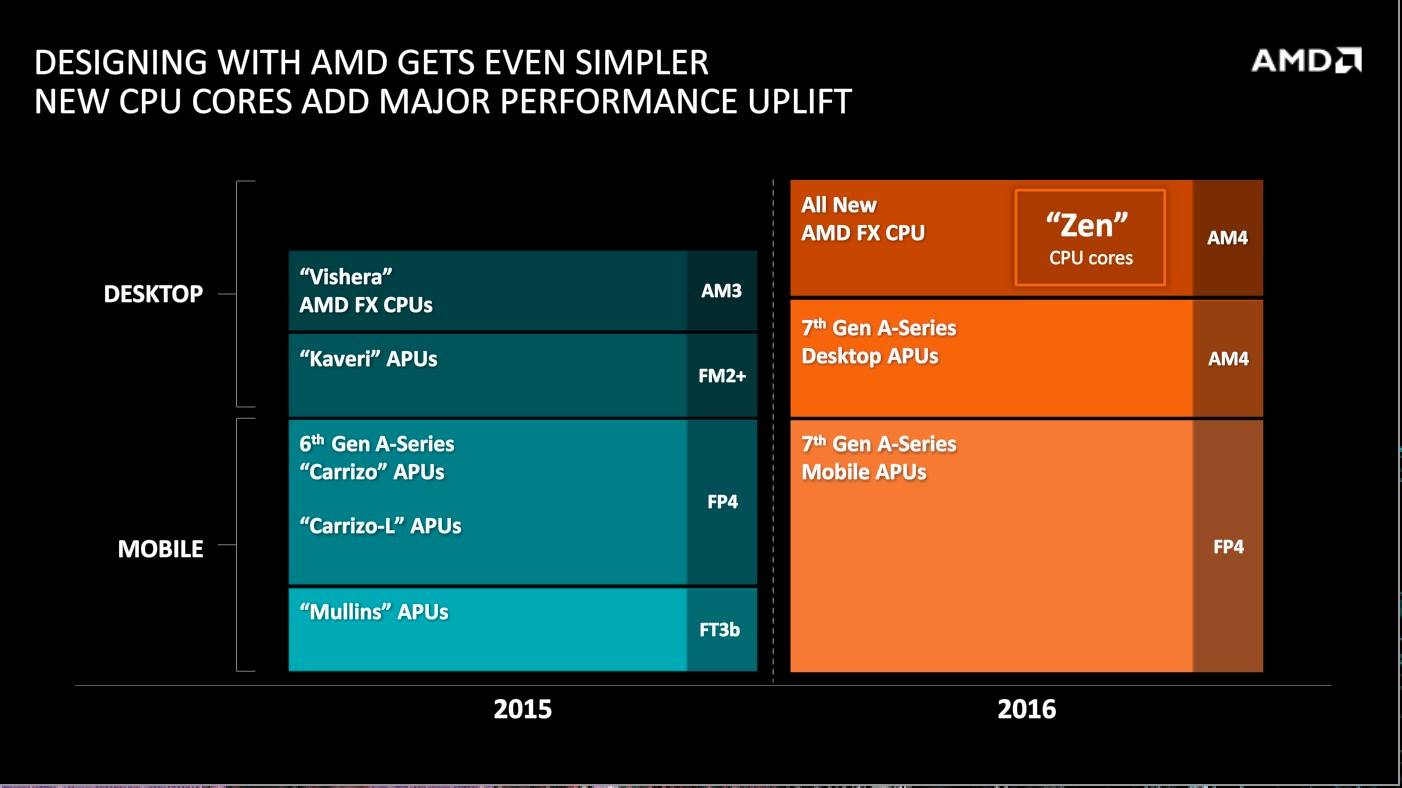 Despite sharing the same platform, Summit Ridge processors will be made on a more advanced 14nm/16nm FinFET manufacturing process for better power efficiency and higher performance. While the Bristol Ridge and Stoney Ridge families will build-on the current Carrizo SOC design and maintain the same Globalfoundries’ 28nm SHP process. However Summit Ridge, Bristol Ridge and Stoney Ridge will all share DDR4 memory support and AM4 socket compatibility

The entire press event will be live streamed on AMD's Computex landing page at 10 PM EDT.

AMD : Zen Rivals Intel In Every Aspect, Launching In Late 2016