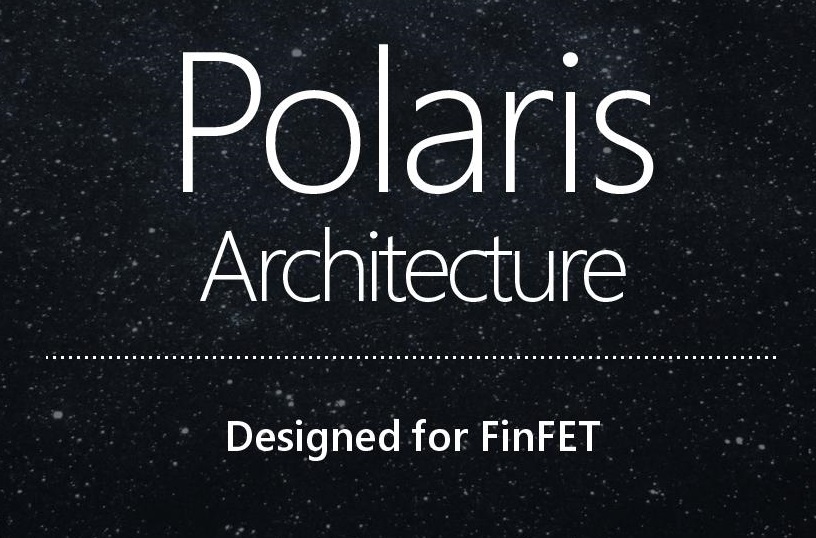 AMD's Polaris 10 Radeon 400 series GPU is all but confirmed for a June 1st launch at Computex according to a leak that has just hit the web. This is the very same GPU that will purportedly deliver R9 390X/390 performance at half the wattage and for less than $299.

According to Arabhardware they've received an invite for a press event on June 1st that will include the launch of AMD's upcoming Polaris architecture based Radeon 400 series graphics cards. In addition to the company's new 7th generation Accelerated Processing Units.

Rarlier rumors that indicated AMD would skip Computex have recently been debunked. The company has officially announced that it will be attending the event in full force. They company has yet to disclose what products exactly it plans to launch at the event but according to the invite that's been sent to Arabhardware the launch will definitely include AMD's Polaris 10 GPU. 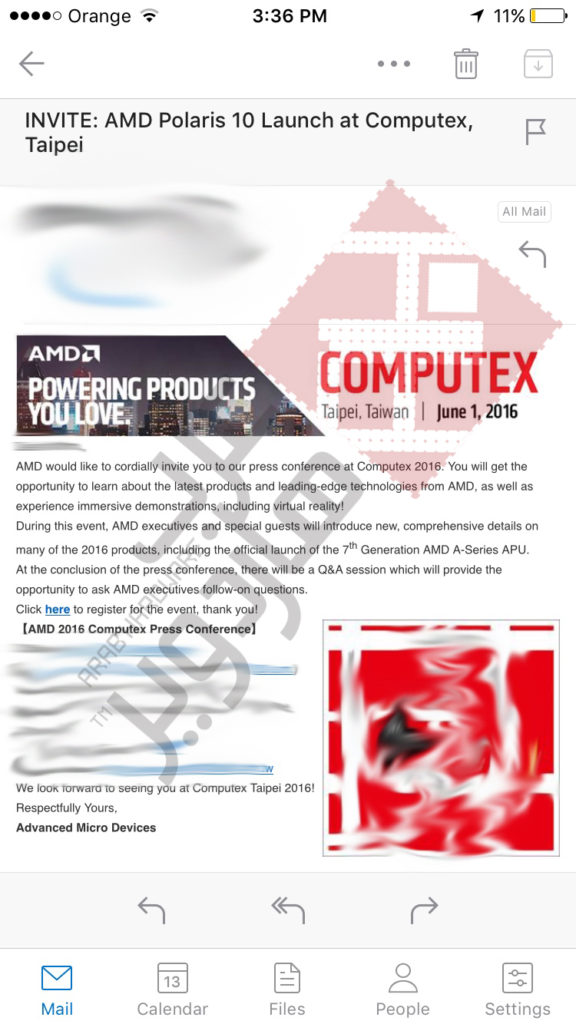 AMD's official statement is that Polaris will be coming out "mid 2016". Although earlier this month tech pubs in Asia reported receiving invites to a press conference hosted by AMD in which the company plans to announce its upcoming products at the end of the month. The event was reportedly taking place between May 26-29 in Macau the "Las Vegas of Asia" as it's sometimes referred to. That's right before Computex where it's believed Polaris graphics cards will officially be introduced to the market. It's very likely that AMD will also be launching Polaris 11 at the event.

There's certainly evidence to support this. AMD launched a landing page for Polaris in early May, so a product announcement is definitely nearing. The page includes teaser die shots of both the Polaris 10 and Polaris 11 GPUs. These die shots were thoroughly examined since then revealing that Polaris 10 is indeed around ~230mm² large as was previously thought. Making it roughly one third smaller than Nvidia's GP104 GPU powering the GTX 1080 and 1070 graphics cards which is believed to be around 320mm² large. This in turn means that Polaris 10 products will be significantly more affordable, lending Fudzilla's "less than $299" claim legitimacy.

Despite 11 being a larger number than 10, Polaris 10 is actually a larger, higher end GPU than Polaris 11. Chief Architect & head of AMD’s Radeon Technologies Group confirmed at Capsaicin that the naming scheme is time-based & Polaris 10 had simply been designed before Polaris 11, hence the smaller numerical designation.

Polaris 10 is AMD’s mid-range 14nm FinFET graphics chip, Polaris 11 is the smallest of the family and Vega 10 is the HBM2 powered high-end flagship 14nm GPU launching in 2017 to succeed the Fury lineup. It will feature AMD’s next generation Vega architecture and will be the company’s first GPU to feature second generation High Bandwidth Memory.

Polaris 11 was the very first FinFET graphics chip in the world from either company, Nvidia or AMD,  to be demoed publicly.  AMD first demoed the chip to the press, including WCCF, back in December ahead of CES. AMD did it once again in January at CES and that was the very first public demo of the Polaris or in fact any high performance FinFET GPU.

The demo consisted of two identical systems one configured with Polaris 11 - 470/460 class GPU - and Nvidia's GTX 950 running Star Wars Battlefront at 60 frames per second. The Polaris 11 system in its entirety consumed 54W less than the GTX 950. Considering that the GTX 950 on its own pulls  ~95W on average under gaming workloads, Polaris 11 is essentially more than twice as power efficient. Delivering the same performance at roughly 40 watts. Which is less than half the power consumed by the GTX 950.

This is very early silicon, by the way. We have much more performance optimization to do in the coming months. But even in this early silicon, we’re seeing numbers versus the best class on the competition running at a heavy workload, like Star Wars—The competing system consumes 140 watts. This is 86 watts. We believe we’re several months ahead of this transition, especially for the notebook and the mainstream market. The competition is talking about chips for cars and stuff, but not the mainstream market.

With all these leaks coming out we're beginning to get a much clearer picture of what AMD is doing with its next generation Polaris based graphics cards. All the leaks that we've seen so far for Vega 10, Polaris 10 & Polaris 11 indicate that AMD is configuring its next generation GPUs with similar Stream Processor counts as their Fiji, Hawaii & Pitcairn predecessors, the Fury,  R9 390 and R7 370 series.

The majority of the IP blocks in the graphics engine are new. Including a memory controller, for upcoming memory technologies, in addition to more capable and more power efficient compute units and geometry engine. The level 2 cache and the command processor have also been updated. Beyond what AMD detailed above about the key features and the display/multimedia updates the company did not go into much detail about what exactly went into these new IP blocks. We were promised more information will be revealed as we get closer to the release of Polaris graphics products.

AMD has stated on the few occasions that it talked about Polaris that 4th generation GCN core are significantly more powerful than their predecessors, hence the tame stream processor counts we're saying.

Yesterday, leaked specifications for AMD's Polaris 10 & 11 have made their way to the web. The specifications indicate that we're looking at a comprehensive lineup coming from AMD below the $299 price point.

AMD's Polaris 10 GPU reportedly features a 256bit GDDR5/X memory interface & cards based on the chip will feature 8GB of memory. The GPU packs 32 GCN 4.0 compute units for a total of 2048 stream processors, the same number found in AMD's current R9 380X. However, Polaris 10 cards are reportedly significantly faster and will deliver R9 390X/390 class performance. Leaks also pit the MSRP at less than $299 at launch.

5.5 TFLOPS, is only 0.1 TFLOPS shy of the 2816 SP R9 290X. An impressive feat considering the 290X is a ~290W card with 37.5% more GCN stream processors and a memory interface that's twice as wide. The card is also reportedly rated ataround 110W-135W depending on the GPU configuration and clock speeds according to Benchlife. Interestingly, according to VCZ this 5.5 TFLOP GPU is not even a desktop class chip but a mobility variant. So the desktop variant should be even more powerful

A 5.5 TFLOPS rating would put Polaris 10's GPU clock speed at around 1350Mhz, a 39% increase over its predecessor the R9 380X. This is would be largely thanks to the brand new FinFET manufacturing process which is capable of significantly higher clock speeds without sacrificing leakage. This as we've seen has also allowed Nvidia to boost clock speeds on its Pascal GPUs by 40%.

Polaris 11 on the other hand will feature 14 GCN 4.0 compute units for a total of 896 stream processors. The GPU features a 128bit GDDR5/X memory interface and Polaris 11 cards will feature 4GB of memory. The GPU is rated at 2.5 TFLOPS and a TDP that's less than 50 watts.

That's 0.5 TFLOPS north of the 110W R7 370 at less than half the wattage & exactly the same performance of the 180W R9 270X. According to the latest leak Polaris 11 will replace the Bonaire GPUs powering the R7 360 and 260 series cards but will outperform the larger Pitcairn powered 370 and 270 series cards. Again, according to VCZ this is also a mobility variant of Polaris 11 that will power thin gaming notebooks.

Interestingly, entries for both Polaris 10 and Polaris 11 have been spotted several months ago on a number of benchmarking databases including SiSoftSandra & Compubench. The specifications reported by these databases are slightly different than what TPU & VCZ have reported. Polaris 10 is shown to have 4 more CUs and Polaris 11 is shown to have 2 more CUs than the specifications leaked by VCZ and TPU. Which could be the result of a misreading due to Polaris related driver & BIOS parameters that these databases aren't yet familiar with.