AMD is preparing its next-generation Richland series of APUs which would replace the current 'Trinity' series. Fudzilla has got the codename from its sources, of the fastest Richland APU known to be AMD A10 6800K.

The AMD A10 6800K would be the flagship accelerated processing unit of the Richland series or the Bolton FCH. The AMD 10 6800K is said to be based on a 32nm fabrication process featuring updated x86 Piledriver cores as we learnt from AMD's 2013 roadmap. According to the roadmap, AMD A10 6800K and the rest of the Richland APU lineup would consist of Radeon Cores 2.0 which is said to be the second generation GCN (Graphics Core Next) architecture along with HSA enhancements.

The AMD 10 6800K itself is a Quad Core and will feature a TDP of 100W. The Richland series A-Series APUs would come with FM2 socket compatibility, just like the current Trinity lineup. And would also include AMD's Radeon HD 8000 series chips which replace the current HD 7000 series on Trinity A-Series APUs. According to Fudzilla, AMD A10 6800K along with the A-series Dual and Quad core lineup launches in late Q2 2013 (possibly June) while mass production commences in Q1 2013. We would see a total of Four Quad Core A-Series and Two Dual Core A-Series Richland APUs in the next generation APU lineup from AMD. 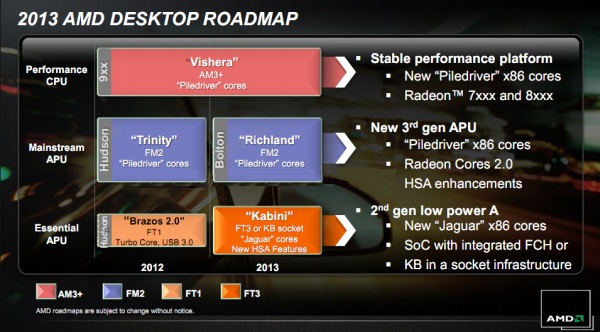 In 2014, AMD is expected to unveil Kaveri which would feature the next generation steamroller core architecture and in mid-2013, AMD would launch Kabini as the entry level APU to replace Brazos/Brazos 2.0. Most probably each new generation of mainstream APU would be equipped with AMD's latest Graphics Core architecture.