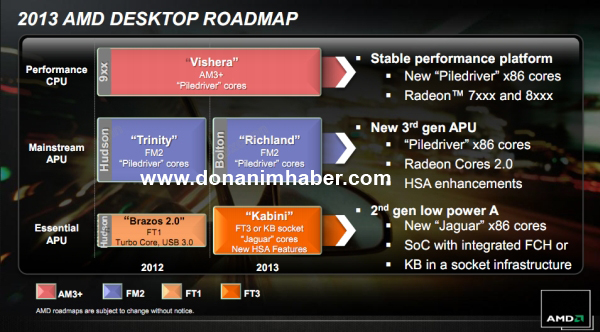 The 2013 AMD Desktop Roadmap has revealed that the AMD Richland APU (3rd Generation Accelerated Processing Unit) would be based on the x86 Piledriver core architecture and launch in 2013. AMD's Low Power Kabini APU and Radeon HD 8000 series are also confirmed to launch in 2013.

According to the roadmap, AMD Richland APU would not feature the steamroller core architecture but instead would be based on the current generation x86 Piledriver core architecture which is currently being used within the recently launched Trinity APUs. Along with it, ARM cores would also be fused on the same die for AMD's HSA (Heterogeneous System Architecture) enhancements. The APUs would remain compatible with the FM2 socket boards and would be include the latest Radeon Cores 2.0 which would presumable fall under the HD 8000 series (Sea Islands) specs. The AMD Richland APU would be the mainstream/performance entry level chips and would launch around mid-2013.

In addition to the mainstream APUs, AMD is also expected to unveil the 2nd generation low power Kabini APU which would be updated with x86 Jaguar cores. The chip has already been taped out and is expected to debut in 1H of 2013. The chip would feature the PCH fused on its die making it a true SOC (System on chip) which doesn’t needs to rely on external controllers. In addition, the new HSA features would also be introduced in Kabini and Tamesh 28nm ULP (Ultra Low Power) APUs. The Kabini APUs fall under AMD's "Essential APU" branding scheme.

On the performance forefront, AMD would rely on Vishera 2.0 (FX-Vishera refresh) since the company's planning to keep the chip for the year 2013. This does prove that our previous reports about AMD possibly not launching steamroller during the next year came out to be true.

On the GPU side, this is the first official conformation of HD 8000 series cards in 2013 by AMD. Although the date has not been revealed but we expect that the GPUs would be out by late Q1 or early Q2 of 2013. The Sea Islands based cards would be based on the GCN 2.0 (Graphics Core Next) architecture updated with various process improvements and architecture enhancements. More on the AMD Sea Islands can be found at 8900 series and 8800 series.