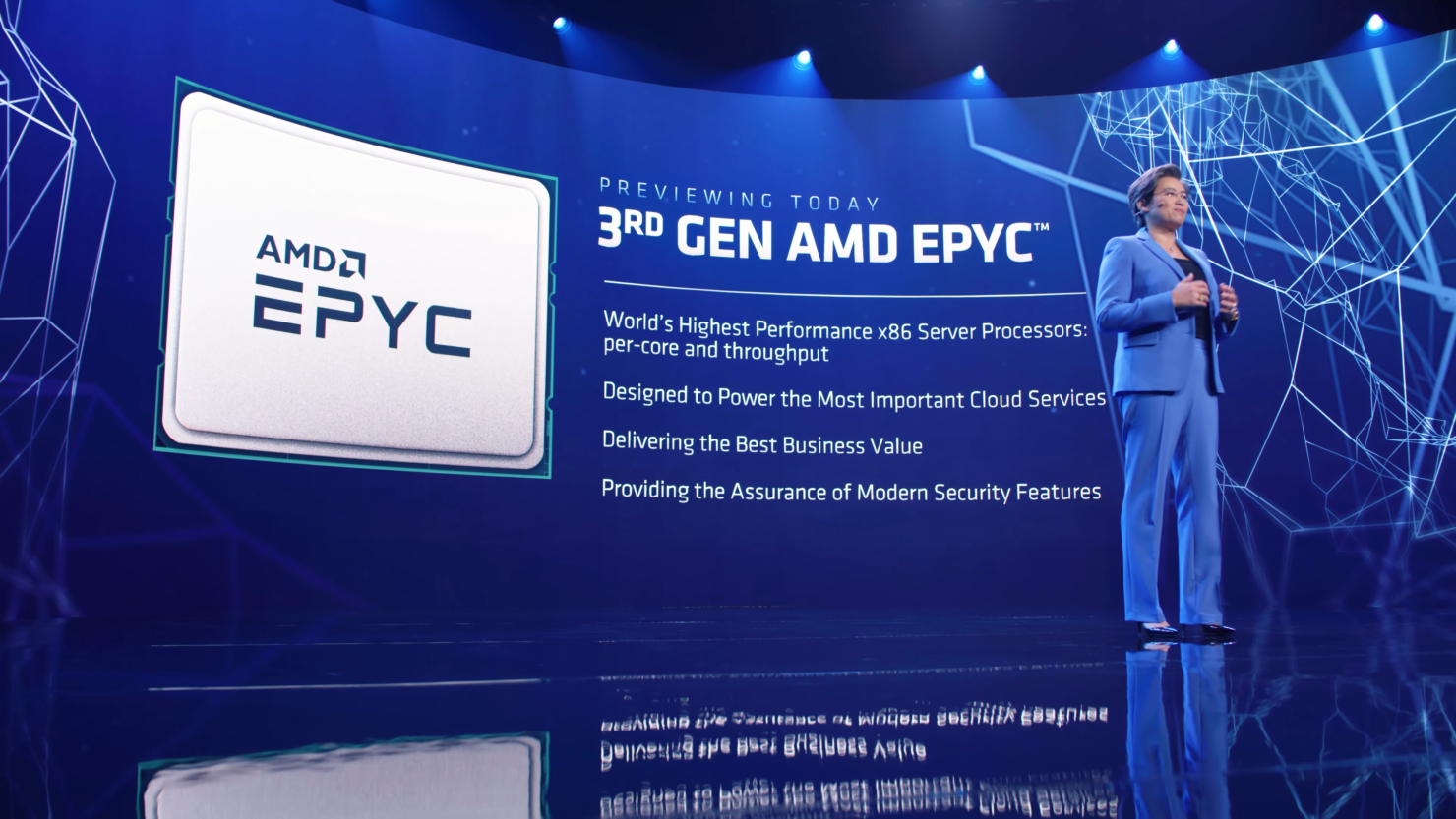 An AMD EPYC Milan CPU based on the Zen 3 core architecture has once again been spotted within the Geekbench benchmark database, showcasing an impressive performance boost over the 2nd Gen EPYC Rome lineup. We had already seen a 32 core part compared to dual Intel Xeon CPUs and now we can also tell how fast a 48 core part will perform.

Just like last time, the benchmark was carried out on a 1P (single-socket) server running the AMD EPYC 7543 CPU which is part of the 3rd Gen Milan lineup. The Milan lineup is based on the Zen 3 architecture and features a new core/cache configuration. The Wiwynn SV302A-U is a 1U rack that comes equipped with a total of 384 GB of DDR4 memory.

The AMD EPYC 7643 CPU features the Zen 3 core architecture and is comprised of 48 cores and 96 threads. As for clock speeds, the chip has a rated base clock of 2.30 GHz and boosts up to 3.60 GHz which is quite a respectable clock rate for the processor. All cores were boosting close to 3.45 GHz. 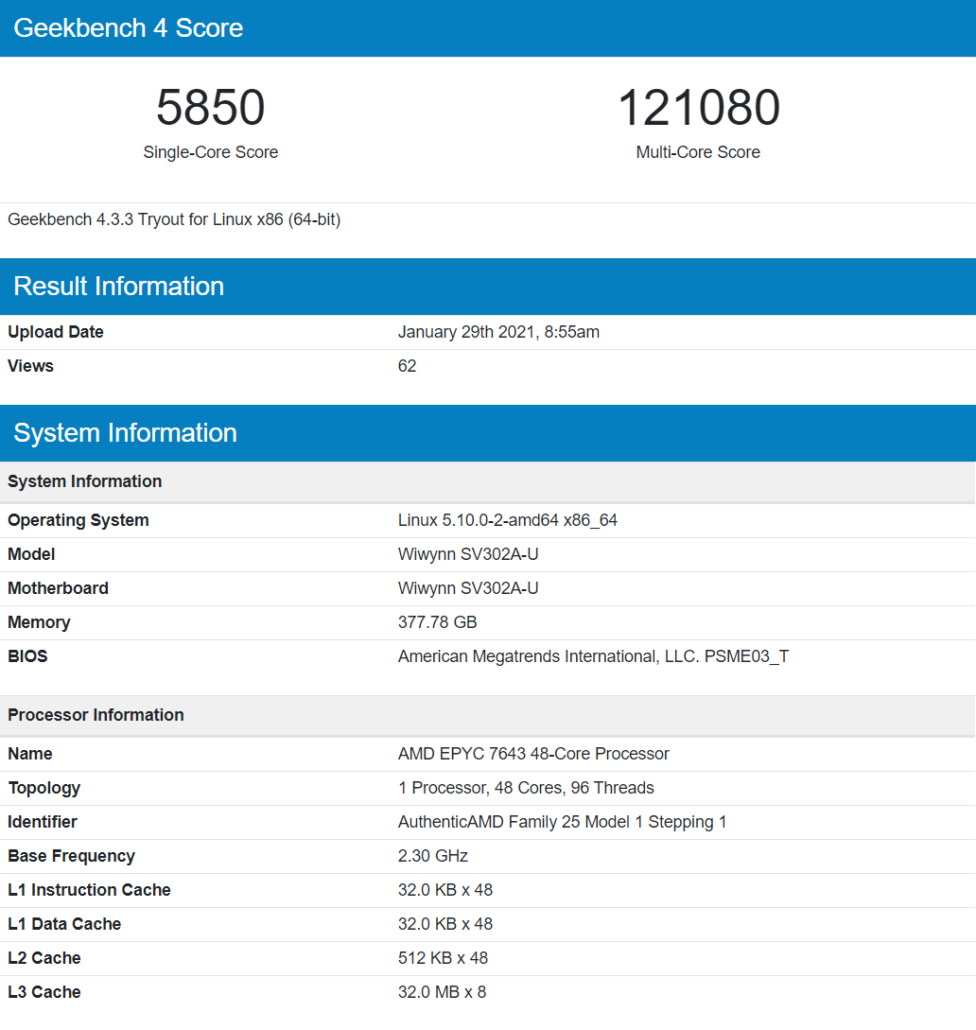 Based on the clocks, we can assume that this part will have a TDP of 225W. The CPU also features 256 MB of L3 cache and 24 MB of L2 cache. It confirms that the chip is actually making use of 8 CCD's instead of four. The four CCD 32 core part would be configured for a different SKU with 128 MB of L3 cache.

Compared to the AMD EPYC 7543, the 7643 posts a lower single-core score which is due to its lower boost clock but comes out 9% faster in multi-threaded performance. Do note that these results are still early and given the number of cores/threads that the EPYC 7643 offers over the 7543 & the fact that the Geekbench 4 is now considered an old benchmark, the actual performance jump could be much significant for Zen 3 based Milan chips. 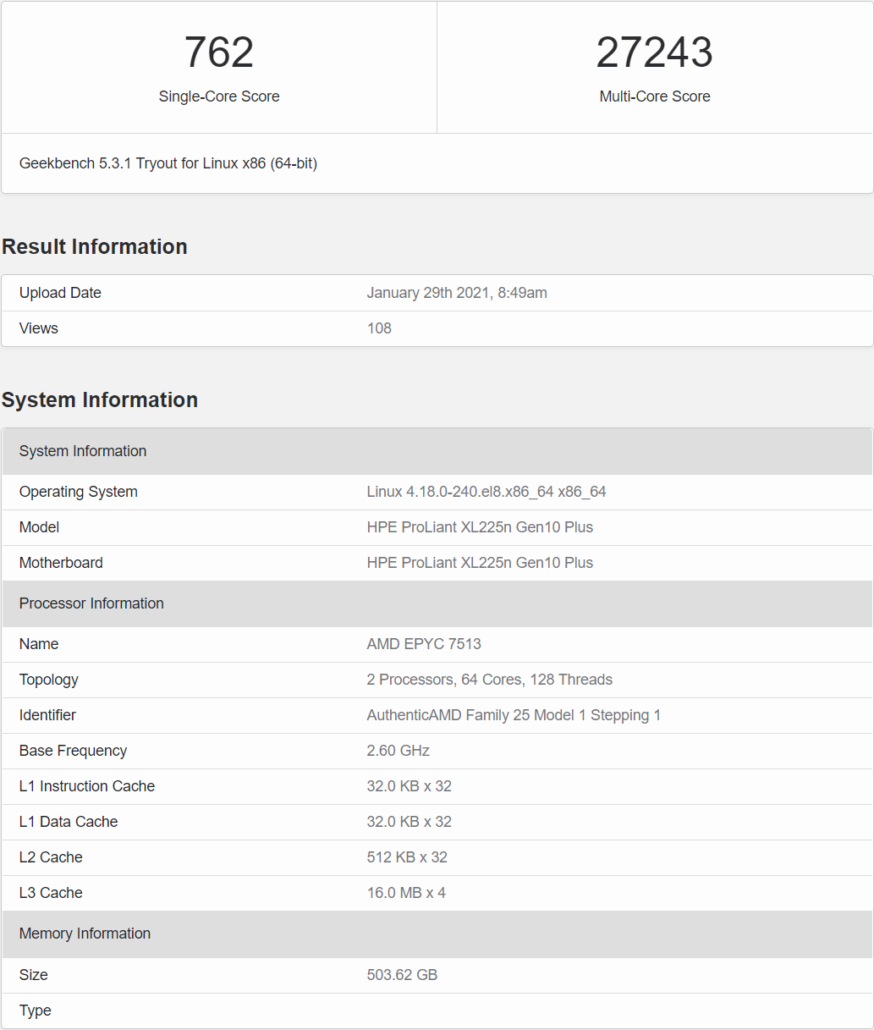 In addition to the EPYC 7643, an entry of a 2P server has also been spotted, featuring two EPYC 7513 CPUs. Each CPU features 32 cores and 64 threads so that's a total of 64 cores and 128 threads on the HPE ProLiant XL225n Gen 10 plus rack that was spotted. The server was equipped with 512 GB of DDR4 memory. Each CPU features a 2.60 GHz base clock, 64 MB of L3 cache, and 16 MB of L2 cache. The AMD EPYC 7513 has a boost clock rated at 3.65 GHz but within this particular config, the CPUs were only operating at all core boosts of 1.8 GHz which is also why the score they reported is not as impressive.

“We’re on track to launch our third-generation EPYC Milan processors in March with a strong ecosystem of support.”

So in apples to apple comparison, the AMD EPYC Milan CPUs will have a tremendously higher lead and we are just taking general performance without mentioning the better performance/value and perf per watt which would translate to lower TCO when building a Milan server. The AMD 3rd Gen EPYC Milan CPUs are all set for an epic launch in March this year so stay tuned for more info on the next disruption in the server segment.