Compatible with iPhone, iPad, and the iPod Touch the second version of Air Display too is now launched on App Store. Air Display 2 is a great business / education app to help you increase your screen real estate, or share the screen among different users. The maker, Avatron Software has just released the sequel of its very popular external monitor app for the iOS, Air Display. The app is optimized for iOS 7 and works beautifully.Working pretty much like its predecessor, Air Display 2 has its makers saying:

… you can wirelessly extend your computer desktop to gain more space or you can mirror your computer’s screen to your iOS device and control your computer with intuitive iOS touch gestures and/or Air Display’s elegant built in keyboard. Got a Bluetooth keyboard? you can use that too!

Lifehacker has termed Air Display as the easiest way to turn an iPad into a second display. 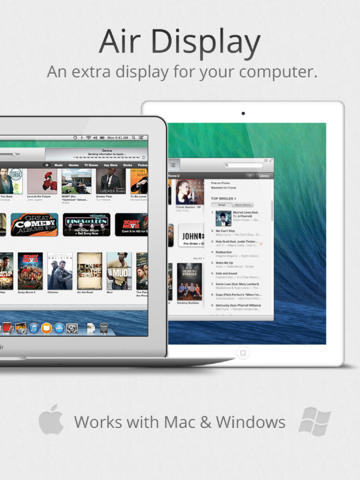 The biggest selling point of this latest sequel of Air Display is that it wirelessly mirror your screen to up to four iPad simultaneously. Making the app perfect for presentations, training, educational and group study sessions. Air Display 2 works along with a free app for Mac or a PC. For setting up the app, your computer / Mac must be on the same WiFi network as the connecting clients.

Although, initially the feature of mirroring screen to up to four iPads is only available to Mac, Windows support is already in work - "(multi-client support coming soon to Windows too)".

You can get this beautifully helpful app from the App Store using this link for only $9.99. The prices seem to be increasing with the popularity so grab your at soonest!

Note: the original Air Display app has been removed from the App Store.