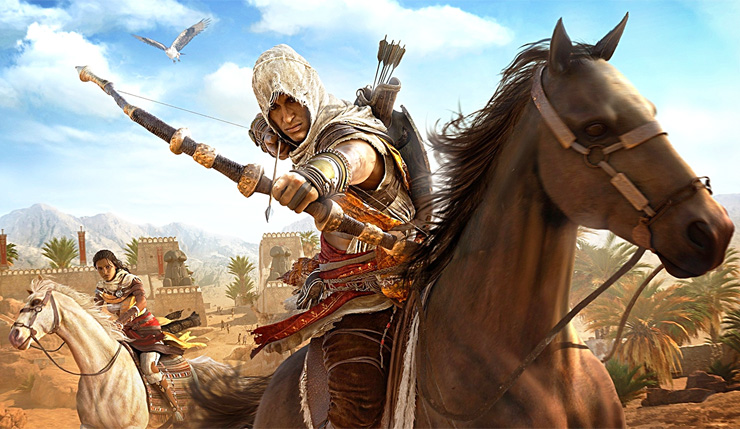 Assassin’s Creed Origins is about to launch its biggest free update yet. Update 1.3 will include the combat-free Discovery Tour and a full New Game+ mode, which should keep fans of Ubisoft’s Egyptian adventure busy for some time to come. Ubisoft has released a new Discovery Tour trailer, which provides a first glimpse at the educational mode in action. Check it out, below.

According to Ubisoft, the mode will include an impressive 75 individual tours, which will last between 5 and 25 minutes each. Here’s Ubisoft’s official Discovery Tour description:

“This new educational mode of the game lets everyone, from players to history-enthusiasts and non-gamers, choose between free roaming the beautiful world of Ancient Egypt to learn more about its history and daily life, or embarking on guided tours curated by historians and Egyptologists. People can discover and explore a world free of conflict, time pressure or gameplay constraints, where storyline and quests are not active and the world of Ancient Egypt evolves into a combat-free living museum.”

As mentioned, update 1.3 will also add a New Game+ option. Players will be able to carry over most of their character progression, including equipment, abilities, crafting status, XP, player level, and some inventory items (crafting materials, arrows, tools, animal goods, and trinkets). Of course, all story progress and missions will be reset and enemies will go up a difficulty level. Ubisoft has also confirmed there will be a “unique reward” for those who play through NG+, but they’re keeping what that is under wraps. A pyramid-shaped foam hat, I'm hoping.

Update 1.3 will also include your regular laundry list of tweaks and bug fixes. You can get the full patch notes, right here.

Assassin’s Creed Origins update 1.3.0 launches on PC, Xbox One, and PS4 tomorrow (February 20). It will be approximately a 5.5 GB download on consoles and 2.6 GB on PC.