When it comes to images, cases and render leaks, the 2015 Nexus smartphones from Google are perhaps the most leaked devices out there. Courtesy of said leaks, we've managed to learn countless bits of information about the upcoming device's design and external details, and as of now we have a fair bit of idea what to expect from them. But if you were looking for some fresh set of images today, look no more. Some more of these have surfaced and you can take a look at them below.

When it comes to this year's Nexus smartphones from Google, we have two contenders which are expected to be launched together by the search engine giant. Out of the two, LG's device has seen more leaks than its Huawei counterpart and today you can add some live images to the mix as well. As can be seen in the image above, the LG Nexus for 2015 will be coming with a fingerprint sensor on its back side, coupled with a camera sensor right at the top.

On the right side of the device we can take a look at what appear to be the volume rocker and the power buttons for the device. Both of the buttons being on the left side of the device is a feature that's also surfaced on the Huawei Nexus in previous leaks, so both the devices should be come with some more similarities apart from the Nexus brand name and stock Android. And speaking of similarities. When compared to the Nexus 5, LG's device bears quite a bit of similarities, though it comes with a much reduced thickness. 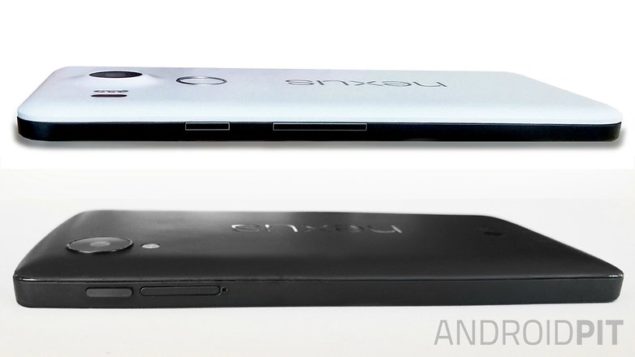 In terms of design, both the devices follow similar aesthetics and come with rounded off corners, similar placement of the Nexus name at the back among a few similarities. In addition to the images above, the source of these images also believes that Google's Nexus for this year will be coming with a blue shade but that's all we've managed to uncover today. The LG Nexus is expected to come with the Snapdragon 808 on board, coupled with a 5.2 inch screen and 3 GB of RAM.

With these specifications and a Full HD display resolution, Google's not looking to release a top tier device this year it seems. Rather, with the 2015 Nexus' reasonable specifications and light pocket prices, looks like Google wants to spread Android Marshmallow as far as it can. Both the Nexus devices for this year are expected to be launched on September 29th, its not long till we get to lay our eyes on them. Until then, stay tuned and let us know what you think in the comments section below.