We have been seeing various leaks and images of Windows 10 lately but possily today's is one of the biggest so far as the Windows 10 build 10125 has leaked online with some new changes and enhancements in the interface. Coming just after the Windows 10 Preview (10122), the latest preview's leaked screenshots show quite a few changes not yet seen. The build in question is reportedly not expected for public. Here are the leaked screenshots and the list of changes spotted in Start Menu and UI. 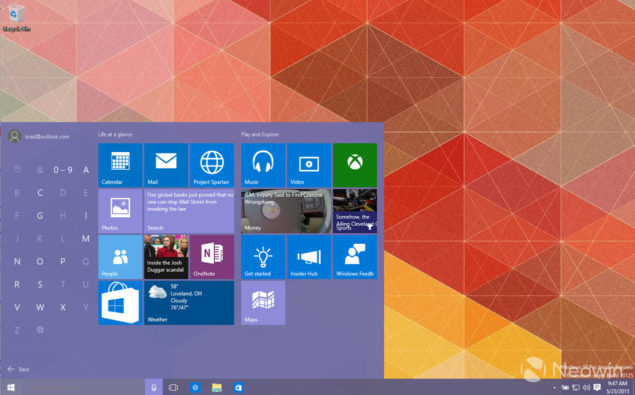 Getting more and more enhancements with each build, Redmond wants to make this one as perfect as possible. Thanks to various leaks, we already get to know these changes in the OS before they could make to Insider Previews. So here you go, some more Windows 10 leaked screenshots from the latest 10125 build.

Some of the changes spotted through the latest Windows 10 leaked screenshots include:

And of course, you can spot some new icons in the these latest Windows 10 leaked screenshots too. Windows 10 10125 build shows these new icons for folders, drives, Taskbar, and the File Explorer. As you can see in the images below, the icons look a lot flatter now giving a consistent look to the OS.

Windows 10 is expected to be released internationally later this summer. Over 190 countries and 111 languages will see the release of last Windows. Are you excited?

Let us know how you liked the new changes in this latest leaked 10125 build. Do you approve of the way Microsoft is taking the Windows to?