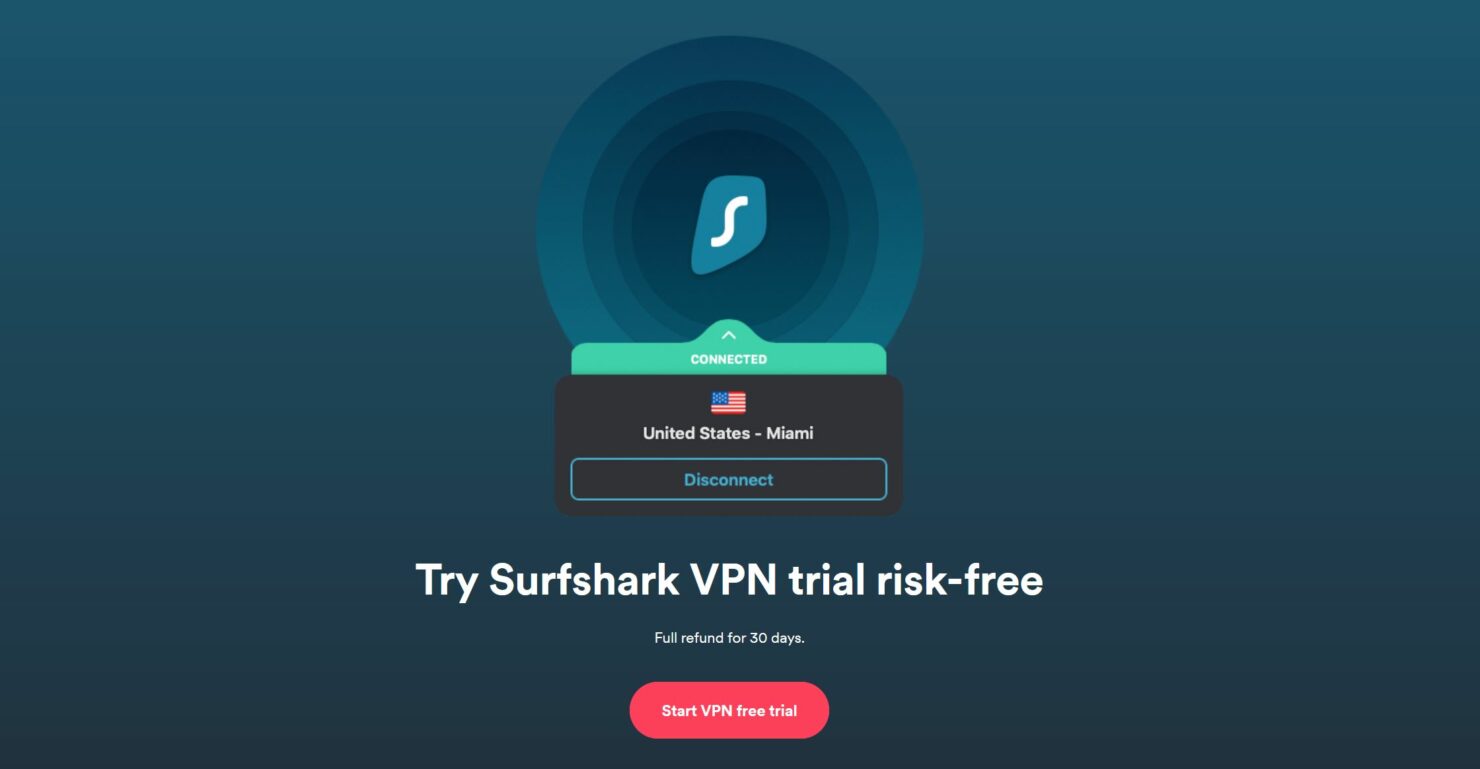 Surfshark brings a lot to the table as a reliable VPN service. Whether you need to use a VPN to access geo-restricted content, want to protect yourself during P2P downloads, or you want to browse the Internet in privacy, this service has many features to offer.

Wondering which VPN to buy? Surfshark might be the answer

The power and reliability of a VPN service is one of those things that people just have to try for themselves. After all, it's one thing to talk about how it feels to be able to browse the Internet without ads bearing down on you at every turn, and companies using data without consent for marketing purposes and to sell, and it's another thing completely to actually experience it. Surfshark has a 30 days VPN trial available so it gives users plenty of time to determine whether this VPN is right for them. It's risk-free and is a great way to test out all of the features without committing to the service.

VPNs are great for using when someone is traveling halfway around the world, but what happens if they run into some trouble with the service? VPN services that have limited technical and customer support hours make it difficult to effectively use the service. Surfshark provides its users with the support they need, when they need it, no matter what time it is. On top of that, everyone is knowledgeable and can quickly resolve the issue someone is having. In most cases, the first contact is all that's needed to get everything handled.

Governments, businesses, and malicious actors may be trying to intercept internet browsing data from users. If they are using a VPN service and the connection between their device and the VPN drops, that could expose their data to these entities. Surfshark has a kill switch that immediately stops all traffic on the user's internet connection to warn them that their connection is no longer protected. Disconnections can happen for a variety of reasons, so it's important to have this type of protection on hand to avoid any major issues in losing privacy.

Surfshark goes above and beyond with the encryption protocol they use for the data passing through their servers. This level of encryption is commonly used for financial institutions and other organizations that work with sensitive data. Users can rest assured that even if their data got intercepted by a third party, it would not be decipherable by the malicious actor that is trying to use it for their own purposes. In addition to this type of encryption, Surfshark also has two types of VPN protocols that users can choose between.

They both have strengths and drawbacks, and the user can choose for themselves which has the things that are most important to them. That option is primarily available for power users who have some knowledge of VPN protocols and the type of browsing that works best with each. The default option has the broadest range of compatibility for standard VPN use cases.

Some VPN services can be hit or miss on the streaming services they support, if any. It makes sense - the streaming services have a vested interest in stopping VPN services from accessing their content due to the licensing and legal requirements they face in making content available. They often deploy advanced VPN detection technology that can stop many services from connecting to their streaming sites and apps. Surfshark is able to disguise itself so that these services don't know that it's a VPN connection. For example, users can access more than 15 Netflix libraries, which is great when someone is traveling or if they'd like to watch content that's only available on another country's Netflix library.

5. Gets around countries' Internet restrictions.

Internet freedom is not assured around the world. Government and legal authorities, as well as ISPs in some countries, will monitor, censor, and block Internet traffic. Not having privacy or the ability to access the websites of a user's choosing is incredibly restrictive and overreaching. A VPN such as Surfshark, which is designed to circumvent these immoral controls, allows users to get on the Internet without worrying about someone looking over their shoulder and using that information against them. One of the best known examples of this is the Great Firewall of China, which essentially blocks many non-domestic websites. China replaces them with its own versions, which has lead to a completely different Internet experience in the country compared to that of countries with a free and open Internet.

There's always a risk that a VPN service gets sued by businesses or the government, which can lead to an investigation of the information that the VPN keeps on file. Surfshark does not keep connection or usage logs, so even if they are subject to a subpoena, there is no sensitive user information that would end up getting out there. This company keeps the bare minimum amount of information in order to protect its users and offer true Internet privacy. No one should have to worry about their legal internet browsing activity being poured over by unauthorized third parties.

7. Covers all your devices.

Some VPN services restrict how many devices can connect to the service at a time. Think about how many devices use the internet in a typical home. It doesn't make sense to have some devices have full Internet privacy, while others have their data exposed for advertisers, legal authorities, ISPs, and the government to see at will. Surfshark supports an unlimited number of devices connecting to the service so that no one has to worry about which is or isn't connected. Even someone's guests can access the VPN without a problem, which might just make a person's house the go-to place to watch geo-restricted content.

Related to the last point, when someone has that many devices connected, they're also going to run through a lot of data. The average amount of data consumed during an Internet browsing session has steadily increased over the years, especially following the introduction of video streaming services. The increase in available video quality, up to 4K HD, also contributes to data consumption. It's easy to quickly hit a cap in some VPN services, which means that the user either has to upgrade their plan to a more expensive one, or browse the Internet without the VPN service. Neither of these is an ideal solution. Surfshark provides unlimited, high-speed data so that users don't have to end up making this kind of choice. This feature also puts the VPN service in a position to grow with the user as their data usage increases over the years. Being able to stick with the same VPN no matter what technological advances come along is great.

9. Available on many devices and operating systems.

Some VPN services are basic and only support a limited set of devices. Surfshark has extensive support for the most popular devices and beyond. Windows, Linux and Mac computers are supported, and browser extensions are also available for Firefox and Chrome. For mobile devices, Android and iOS devices can access Surfshark's powerful features. In addition to the standard computer and mobile devices, Surfshark also supports several types of smart TV technology as well as video game consoles. Enjoy VPN services on Amazon Fire TV, Apple TV, and a variety of other smart TVs. The Playstation 4 and Xbox 360 also work with this service.

Ads have gotten out of hand on the Internet as companies try their best to squeeze every last bit of profit out of their Internet traffic. Many businesses and websites do this without regard to the user experience, which ends up being incredibly poor on ad-laden sites. There are auto-playing advertisements, ads plastered over every inch of the screen, pop-ups, interstitials, and countless other ad vehicles that make it difficult to access the content the user is there to see. On top of that, some malicious actors use ads as a way to get malware onto devices. While there are several types of ad blocking solutions available, they may not be able to pick up all of the ads or have partnerships with certain advertisers. Surfshark blocks the ads before that traffic even reaches the device, which reduces the processing load on the device's end and helps promote an open and accessible Internet experience.

The Surfshark app is easy to install and user-friendly, even for people who have never used a VPN before. If someone does run into problems, the helpful customer support staff is available to field any questions.

VPNs are an essential part of maintaining Internet accessibility and privacy in the modern world. A reliable VPN is worth its weight in gold, and Surfshark has so many features that make it a dependable choice for long-term VPN usage.