Google One 2TB Plans Will Now Have Bundled VPN Support

There is no denying that the Google One product plan is great for those who are using it, but one thing Google is always adherent to is making sure that they are providing as much security to the users as possible. Especially for those who are always on the go and working at different places, connected to networks that are public. Your data is the priority here, and based on the recent news from Google, you will have an added peace of mind.

Starting today, Google is announcing a new VPN by Google One on their 2 TB and higher plans which is going to provide an extra layer of online protection for their Android devices.

Google is already adept at building advanced security into its product lineup, and the VPN is only going to extend the security and encrypt your phone's online traffic. It does not matter which app or browser you are using, the VPN that is built into the app, so it is just a tap away, and you can be sure that your data and privacy is going to be as secure as possible.

In addition to that, Google is also rolling out Pro Sessions by Google One with VPN support, which will allow you to have one-on-one online sessions with a Google expert in order to learn more about VPNs and how you can stay safe online. You will get access to VPN along with Pro sessions in addition to the 2 TB of storage, along with the number of benefits that already come with the 2 TB plan; like the 10% back in store credit on all Google Store device purchases. In addition to that, if you are sharing your plan with someone else, the VPN can be activated on their device as well, without any additional cost. Google is just making sure that they have more ways of keeping everything secure. 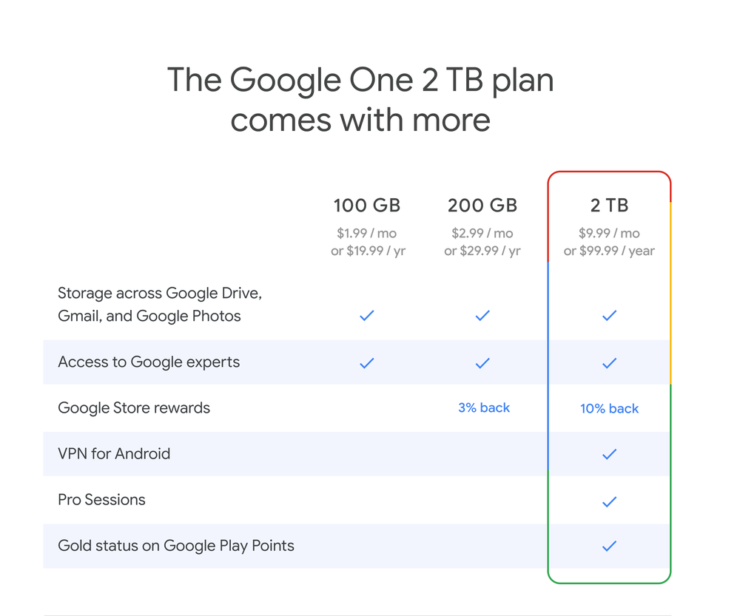 Google Store rewards are going to give you Store credit on hardware purchases from Google Store, but at the time of writing, it is only available in the U.S., Canada, Australia, Germany, and United Kingdom. You should also know that Pro Sessions has limited appointments available and those are also on a first-come, first-serve basis.