The ZOTAC GeForce GTX 1080 ARCTIC STORM features NVIDIA's GP104 GPU. Based on the GTX 1080 config, the chip offers 2560 CUDA Cores, 160 TMUs and 64 ROPs. The chip offers the most insane clock speeds on any chip that is designed for the consumer market. In the case of the ARCTIC STORM variant, we are looking at 1632MHz core and 1771 MHz boost clocks. The card is also jam packed with 8 GB of GDDR5X memory that clocks in at 10 GHz to deliver 320 GB/s bandwidth along a 256-bit bus interface. 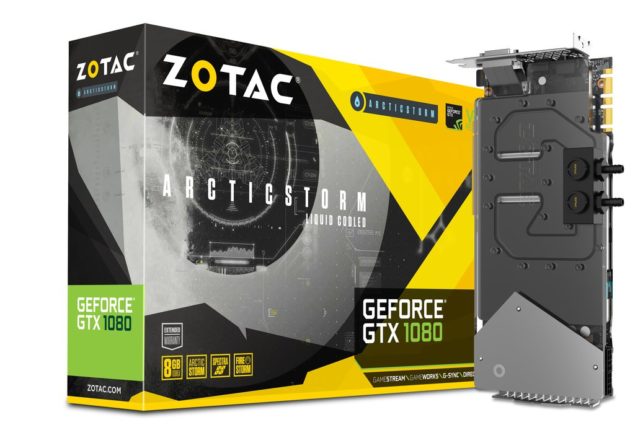 The GTX 1080 ARCTIC STORM is an impressive solution design for water cooling enthusiasts.

Power to the card is provided through dual 8-Pin connectors which seem a bit too much but that's needed to feed the impressive power delivery system featured on the PCB. Utilizing a custom design, the GTX 1080 ARCTIC STORM features a very powerful design, similar to the one found on ZOTAC's GTX 1080 Extreme Edition. The card with its powerful component layout is designed to push overclocks to the limit and you would never need to worry about the temperatures as this card is cooled by liquid.

The air cooled variants from ZOTAC use their Air Storm coolers but this card features the Ice Storm design that involves a large, full cover waterblock. This water block comes with Direct Copper Contact with Micro-channels to maximize thermal performance. These micro channels measure at 0.3mm precision cut thickness and allow maximum flow path for heat to be dissipated effectively out of the block. Being a full cover water block, all of the essential components such as GPU, VRAM and VRMs are cooled by the ARCTIC STORM block.

Users can use the standard fittings such as 6 1/4 threaded, standard inlets or use the bundled pair of barbs that support 10mm inner diameter tubing that offers a wide range of selection and compatibility. Aside from the main water block, the shroud assembly is built with solid metal that adds a lot of durability and protection to the card itself. The metal body wraps around the back and sides of the card and looks great. Furthermore, the front shielding of the water block features ZOTAC's Spectra Light which emits a colorful LED and you can select your preference from ZOTAC's Firestorm utility.

The ZOTAC GTX 1080 ARCTIC STORM is a really high-end variant with which you can reach some impressive overclock numbers. The card would start selling at price around $799.