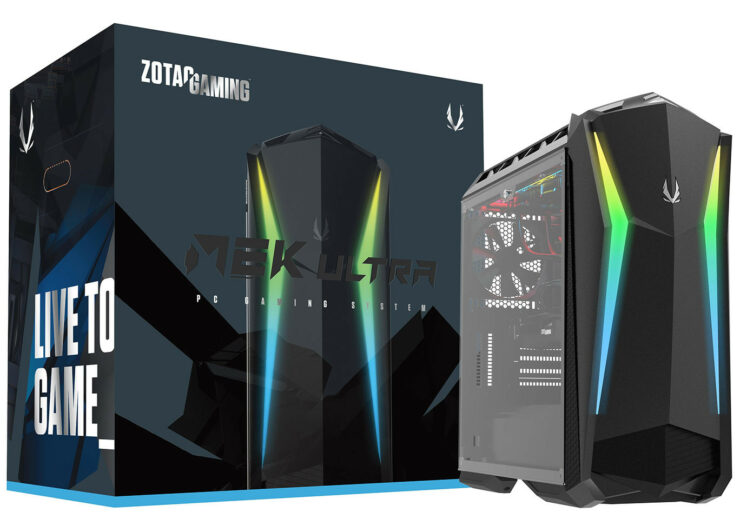 "While its predecessor MEK1 excels with an ultra-slim footprint, MEK ULTRA's grand and fearsome exterior embodies extreme performance out of the box. It is the high-end gaming PC every gamer dreams of, and its easily-accessible interior layout unlocks additional headroom for your future needs,"

The system supports both Z370 and X299 motherboards, so the mainstream and HEDT platform are supported. They list that up to a 10 core CPU can be used, as well as support for 32GB of DDR4 memory with 500GB of NVMe M.2 SSD storage. They also list up to 32GB of Optane memory with 4TB of HDD space for really fast load times and enough storage to keep almost everyone's library installed.

Zotac continues by listing an 80+ Gold PSU that is rated up to 1000W, to power a "Zotac Gaming GeForce RTX 20-series card with up to 11GB of GDDR6" So a 2080TI is likely, with Gigabit Ethernet and Killer AC1550 Connectivity it packs wireless that has a punch. Finally, Zotac lists Spectra 2.0 hardware with addressable LEDs for all your lighting needs as well as an included Crystal View Tempered Glass Side Panel.

Zotac has not listed pricing nor availability, though we would assume the release date is imminent due to the way the press release is worded, though if additional information is given we will update the article.

The ZOTAC Gaming MEK Ultra Gaming PC Is On Sale At Amazon For 28% Off!

ZOTAC Unveils the ZBOX Edge MI643, Which is Powered by Intel Comet Lake