The launch of the Xiaomi Redmi Note 11 series was confirmed last week by Lu Weibing, general manager of Redmi. The series is going official on 28th October, later this month, and you will be getting the Redmi Watch 2 at the launch as well. Now, the Chinese company has shed light on some of the main features of the upcoming smartphone lineup.

Xiaomi has shared teasers that suggest that we will be getting three phones; the base Note 11, Redmi Note 11 Pro, and Redmi Note 11 Pro+. The company also confirms that the flagship Pro+ will come with a dual-cell battery with 120W fast charging speeds. However, we are not sure if the charging brick will be supplied inside the box or separately.

Xiaomi also says that the phone's battery has also passed TUV Rheinland's safety certification. So, if you are worried that your phone's battery might not survive, this should provide you with some peace of mind. 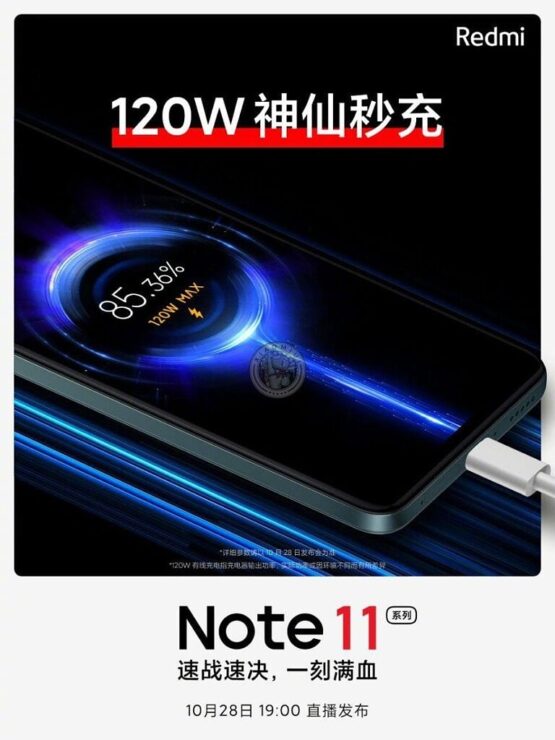 In addition to that, Redmi Note 11 Pro+ will also have a 3.5mm audio jack, Bluetooth 5.2, multi-function NFC, Wi-Fi 6 support, X-axis linear motor, and JBL tuned speakers. The teaser also revealed that the phone would have a quad-camera setup on the back. However, other hardware specifications are still unknown at this point.

The Note 11 series is succeeding the Redmi Note 10 series that enjoyed massive success and a great run in markets worldwide. It is safe to expect the same from Note 11 series.

We are still going to wait and see whether the 120W fast charging will be available to global markets because Xiaomi has done something similar to the Note 10 series, where the Chinese variants received 67W support and global markets were limited to 33W.

The official launch is just a few days away, so we will keep you posted.