With all the buzz that we have been hearing about Xiaomi Mi5, it appears that the handset is going to be a very powerful machine. The term ‘powerful’ is an understatement because the latest Xiaomi Mi5 benchmark leak shows that the device has obtained an unbelievably high score; higher than Samsung’s Galaxy S6 family. For the remaining competition, it would be wise to keep your eyes open because after Redmi Note 2, Xiaomi is going to hit hard once more with its upcoming flagship smartphone, Mi5.

Xiaomi Mi5 Obtains A Score Of 70,000 Plus In Antutu Benchmarking Result; Device Expected To Get Released Either In Later 2015, Or Early 2016 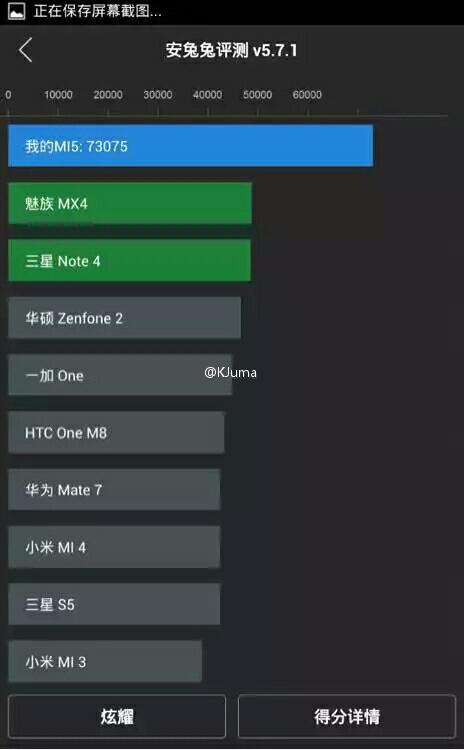 From our previous leak, where we reported that Xiaomi Mi5 would be coming in both a Snapdragon 810 and Snapdragon 820 model, it is possible that the device will not be sporting Helio X20 at all. However, with all the pile of criticism that has converged towards Qualcomm and its overheating Snapdragon 810, it is also possible that Xiaomi would be turning its attention to more suitable alternatives. We have yet to see a MediaTek SoC go beyond its thermal threshold, so the Taiwanese mobile chipmaker already has goodwill as its good luck charm.

As for the benchmarking leak of Xiaomi Mi5, we should treat this with a grain of salt, and wait for more scores to sprout up so that we can provide you guys with some valuable insight on what to expect from Xiaomi’s upcoming flagship smartphone. For now, it looks like the Chinese tech sensation is going to steal the other companies’ thunder once more.