Xiaomi's Mi4 seems to be the current 'in' smartphone. With only a day left in its launch, new pictures and details have started to emerge about the device. Just two days ago we covered a leak about the alleged renders of the Xiaomi Mi4. These renders showed the device in both black and white. Well, this time pictures of the device have surfaced and spotted courtesy of mobilissimo.ro. These pictures in fact look remarkably similar to the renders leaked before. So that makes for two leaks covering the device just one day before its launch. But the Xiaomi Mi4 controversy does not end here. New speculation has started on the fact that whether the back of the device is made up of plastic, as thought before, or of metal. 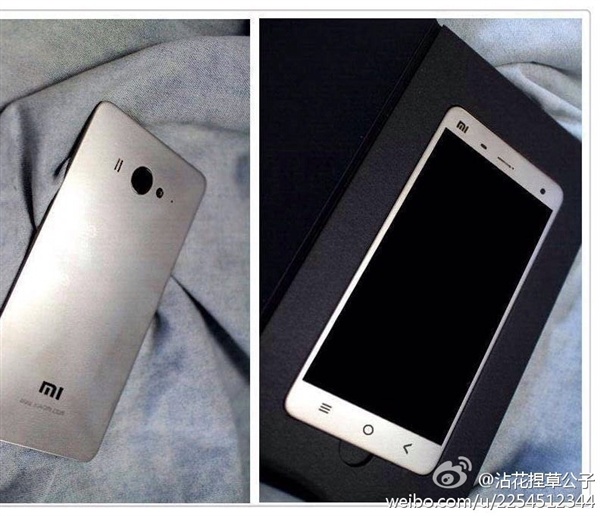 The pictures of the Xiaomi Mi4 leaked by Weibo users reveal a device which looks remarkably similar to the one shown in earlier renders. If you take a look at the picture on the right, you'll see that the arrangement of the front speaker grill, the Xiaomi logo and other things are exactly in line with earlier renders. The overall design of the Xiaomi Mi4 is similar as well. However, the pictures still fail to shed detail on the back casing material of the device. According to reports by those who have handled the device, the back is made out of plastic. But Xiaomi's CEO Lei Jun posted a very interesting update on his Weibo recently. According to Mr. Jun ''The journey of a piece of steel metal'' is what he sees when he looks at the Mi4.

What that's supposed to mean? Go figure. To us it indicates that the Xiaomi Mi4 is made out of metal, according to the company's CEO. Which is in direct contradiction of what is written in the previous paragraph. Well, whatever the case (no pun intended), may be, we'll find out in a day or two anyways. The Xiaomi Mi4 is expected to feature a 5.5 inch screen with a 1080p display. It is to be powered by a Snapdragon 801, which will end up providing it with 4G LTE capabilities. The Snapdragon 801 is to be complemented by 3GB of RAM and 16GB of internal storage. Rear and front cameras for the device are expected to be 13 and 5 MP respectively.

UPDATE: Well looks like Mr. Jun meant the whole smartphone when he was talking about ''The journey of a piece of steel metal". The back of the Xiaomi Mi4 is plastic folks. This has been officially confirmed by VP Xiaomi Mr. Li Wanqiang. Mr. Li says: "The new product indeed uses a lot of metal, but not for the purpose of the back cover." He has also promised that the Xiaomi Mi 4 will not fail to impress you since its being launched at the time of Xiaomi's fourth anniversary. This comes through an update on Weibo. Lets see if Mr. Li's true to his word. Whatever the case may be, creating hype is something folks over at Xiaomi have definitely managed to get right.

UPDATE 2: The Xiaomi Mi4 has just been listed by an online retailer and the specs of the device are different from earlier rumors. More on that here.