When it comes to leaks, there's not a single manufacturer out there that has been spared over recent times. From Apple to Samsung, we've seen devices leak out in entirety before launch, leaving little to guess and building up a little bit of hype as well. But complete roadmap leaks are rare in the mobile world and today we've managed to lay our hands on complete roadmap leaks for 2015 of both Xiaomi and Huawei, who have been rising slowly, but steadily in the mobile world. 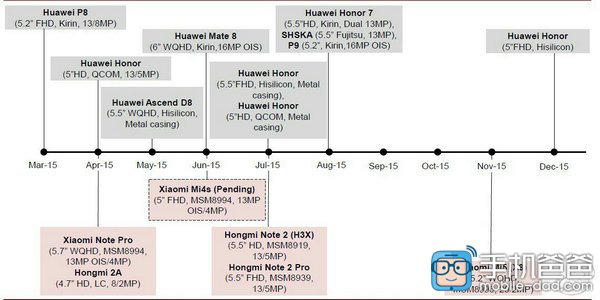 For those who prefer their smartphones with a smaller screen size, the next Xiaomi device coming will be the Mi 4S, that will also feature the Snapdragon 810. Seems like ties between Xiaomi and Qualcomm run deep, and given that the Mi Note Pro manages to perform without overheating, this could manage to reverse Qualcomm's ill fate. Aside from the Snapdragon 810, the Mi 4S will also be featuring a 16 MP rear camera with Optical Image Stablization and a 4 MP front camera. Xiaomi's far from launching flagship devices only this year however. A month later we'll get to see the Snapdragon 410 and 615 featuring on the Redmi Note 2 and the Redmi Note 2 Pro. Aside from the processors, both the devices will come with a 5.5 inch screen, similar to the Mi Note Pro and will be boasting rear and front camera of 13 and 5 MP respectively. The Note 2 Pro however will also be coming with a FHD display. 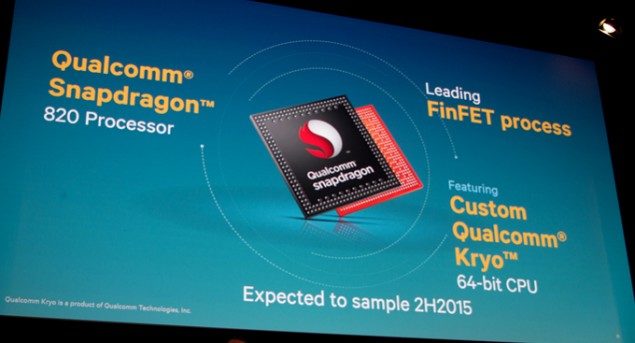 For those wondering about the next iteration in the company's Mi smartphone lineup, we won't be getting to see the Xiaomi Mi 5 until the end of this year, i.e. November. The Xiaomi Mi 5 will be coming with the Snapdragon 820, which is expected to be built on Samsung's 14nm process and will be featuring the company's custom Kryo cores, the first time for any Snapdragon processor. It'll also be seeing a slight increasing in screen size from the Mi 4S with a 5.2 Widescreen Quad HD display listed for the device. The rear camera for the device will be getting a significant overhaul with resolution bumped to 20.7 MP, with OIS of course.

Where does that leave Huawei? The company also has a lot of devices planned for us this year. Out of these, the Mate 8 can be expected to come next month with the company's home made Kirin 930 on board. It'll be featuring a 5 inch WQHD display, similar to the Mi5 and a 16MP rear camera with Optical Image Stabilization. Following the Mate 8, we'll see three Honor devices launched with Chipsets ranging from HiSilcon (owned by Huawei), Fujitsu and of course, Huawei. However there's no saying how accurate today's information is. After all, we could see some of the devices materialize or none of them. Devices such as the Mi4S and the Mi5 have already surfaced over the past, and it doesn't take long for schedules to change. Thoughts? Let us know what you think in the comments section.