The good thing about Android is that the playing field is open for any smartphone manufacturer willing to test their metal on ground. While we all know that the quality of devices offered by manufacturing giants such as Samsung, HTC and LG are nearly always guaranteed to come with top notch specifications, this often leads to little room for creativity, with manufacturers often rushing to climb the specs ladder before one another. So, when new companies offer us devices, its always a breath of fresh air, and top notch devices from Chinese manufacturers are a few that have started to gain prevalence in the smartphone world recently. 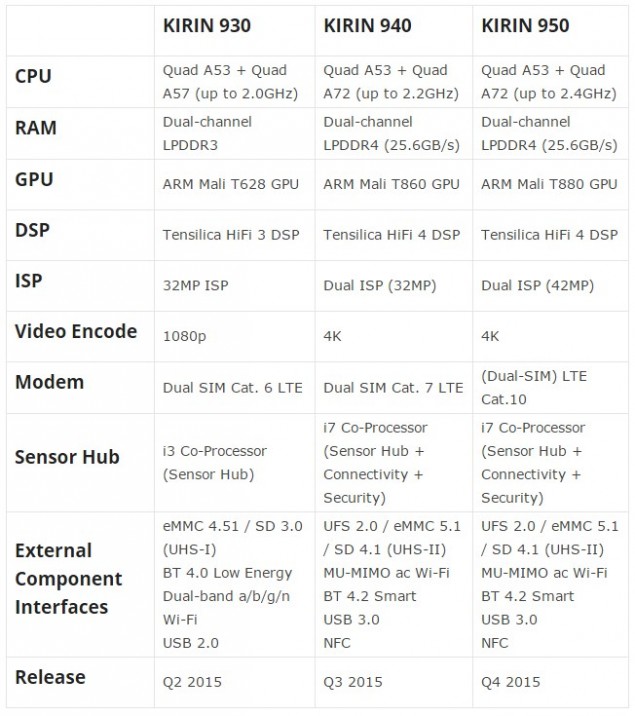 We've seldom heard about Huawei's Kirin chipsets, with the only device which has come featuring one being the Mediapad X2. But looks like, following in Samsung's footsteps, the Chinese manufacturer has started to greatly improve its SoC game. Detailed specifications for Huawei's upcoming Kirin series of processors have been leaked out of China, and as you can see above, they're not going to be held back when it comes to processing power or other chipset specifications.

After we told you about MediaTek having launched the world's first Cortex A72 processor just a couple of days back, looks like Huawei wants a serious presence in mobile chipsets as well. The company's Kirin 950 and 940 will be coming equipped with Cortex A72 on board and will be able to reach frequencies of 2.4 and 2.2 GHz respectively. They will also be octa-core processors, with both of them coming with four pairs of Cortex A53 and four pairs of Cortex A72 cores. The third chipset, the Kirin 930 will be coming with four A53 and four A57 cores.

All three chipsets will also be dual SIM and will include support for LTE bands 6, 7 and 10. Huawei also seems to be taking graphics seriously, with Mali's T-series GPUs present on all the devices as well. In addition, both of the higher end chipsets will be able to support 4K video encoding meaning that you wont be deprived of that high quality video content on your device either. But we'll have to wait until the fourth quarter this year to see whether these on paper specifications end up translating to real life performance. Let us know what you think in the comments section.