Update: It turns out the Xbox Series X shown during the AMD CES 2020 Press Conference was not actually sourced from or authorized by Microsoft. So, any information about the console's ports is not official. AMD provided this statement to The Verge:

The Xbox Series X imagery used during the AMD CES press conference was not sourced from Microsoft and does not accurately represent the design or features of the upcoming console. They were taken from TurboSquid.com.

Uh... oops? You'd think AMD of all companies would know how obsessive tech fans can be, and that they'd be poring over every pixel of information they provided. Will the information in the original article below end up being more-or-less accurate just by dumb luck? There's a decent chance -- two USB-3 and HDMI ports seems pretty likely -- but we'll just have to wait to find out.

Original Story: The big AMD CES 2020 keynote has come and gone, and, despite hints to the contrary, nobody from Xbox showed up during the show. That said, AMD did reveal one new tidbit of information about the Xbox Series X, although it might not have been entirely intentional – early in the press conference they displayed a rotating image of the Series X on the screen, which included a brief look at the back of the machine! Take a look for yourself, below. 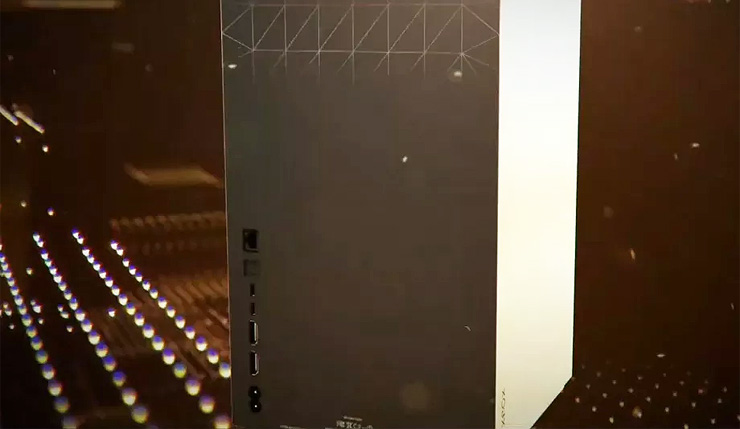 So, what kind of ports can we expect from Microsoft’s powerful new console? Well, it looks like we’ve got and ethernet hookup, a two-pin power connector (indicating an internal power supply rather than an old-school power brick), two USB-C ports, and two HDMI ports. There is also an additional USB port on the front of the machine, probably for controller charging. So, a fairly similar array of ports to the Xbox One, but still pretty generous compared to what Sony and Nintendo consoles typically offer.

The two HDMI ports (one in, one out, most likely) seems to indicate you’ll once again be able to route other consoles or your cable box through the system. While not everyone used that feature, it’s nice to see it’s (likely) coming back. And what kind of peripherals might end up plugged into those USB-C ports? I suppose we’ll have to wait and see!

Before the AMD presser, Xbox boss Phil Spencer also provided a first look at the Xbox Series X’s beefy new APU. Wccftech’s own Usman Pirzada did a die size analysis of the new chip, comparing the processor to the one in the Xbox One X. You can read up on his findings, right here.

So, what are your thoughts on the ports you’re getting with Xbox Series X? Anything missing? Could Microsoft stand to be even more generous?