Xbox One Dashboard Getting Streamlined Redesign, Cortana Getting the Boot

Microsoft has done a lot to improve the Xbox One experience in recent years, but the console’s dashboard can still be a bit cumbersome and laggy. Thankfully, it seems Microsoft has heard the complaints, as a revamped, streamlined version of the system’s Home menu is rolling out to Insider testers now. The new Home definitely looks a bit less cluttered (and hopefully more responsive), and features handy buttons to immediately launch Game Pass, Mixer, and other key apps. Here’s a glimpse of the new layout. 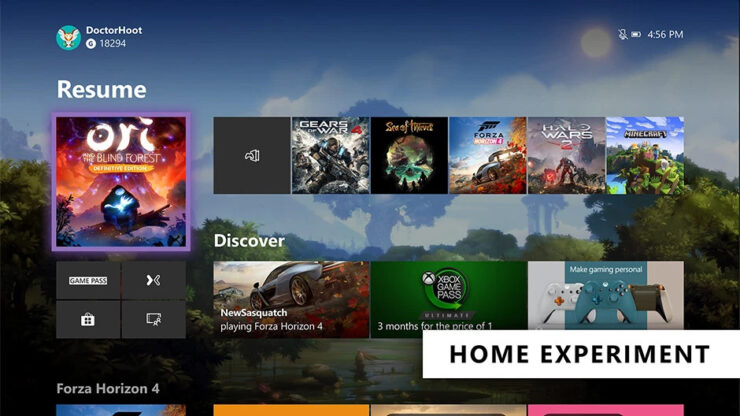 The decluttering extends to Xbox One’s faithful digital assistant, Cortana, who you’ll no longer be able to talk to via your headset. That said, if you’re still really jazzed about issuing voice commands to your Xbox, you can do so through the Cortana iOS, Android, or Windows apps. Here’s a full rundown of the changes coming to the Xbox One Home menu:

The Home on Xbox One is the first thing you see when you turn on your Xbox One, and we want to deliver an easy and seamless experience for you to navigate your console. We’ve heard your feedback and have continued to iterate on Home to get you into your gaming experiences faster and keeping more of your content front and center. With today’s update, we’re experimenting with a streamlined user interface.

With this new Home design, the first thing you’ll notice is we’ve removed the Twists from the top of Home in favor of separate buttons that launch your gaming experiences. The goal is to let you jump into Xbox Game Pass, Mixer, Xbox Community and Microsoft Store quicker than ever. We’ve also shifted things around to make more room for your recently played titles.

Changes to Voice Commands on Xbox One

We are now further evolving the way we support voice commands on Xbox and are moving away from on-console experiences to cloud-based assistant experiences. This means you can no longer talk to Cortana via your headset. However, you can use the Xbox Skill for Cortana via the Cortana app on iOS, Android, and Windows or via Harmon Kardon Invoke speaker to power your Xbox One, adjust volume, launch games and apps, capture screenshots, and more -- just as you can do with Alexa-enabled devices today.

This dashboard update rolls out to Insider testers this week, and will be available to all Xbox One owners sometime this fall.