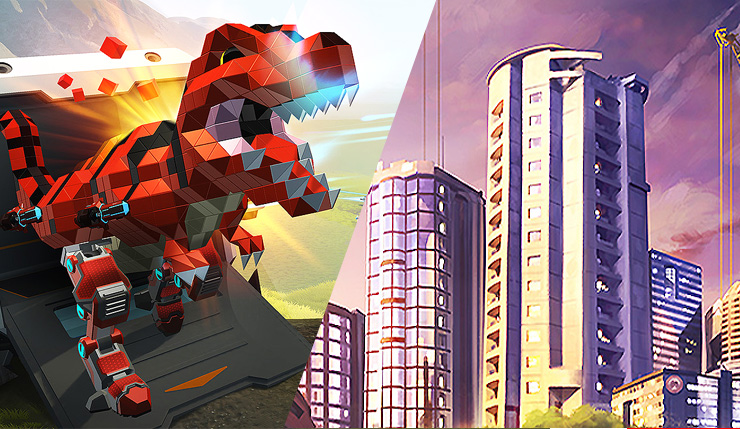 Microsoft has revealed the new games they’ll be adding to Xbox Game Pass in April. These include the Xbox timed-exclusive Robocraft Infinity, Cities: Skylines, The Hunter: Call of the Wild, Kingdom: New Lands, Portal Knights, ClusterTruck, Sacred Citidel, and Late Shift. Check out the official Microsoft rundown of all the April Xbox Game Pass titles, below: 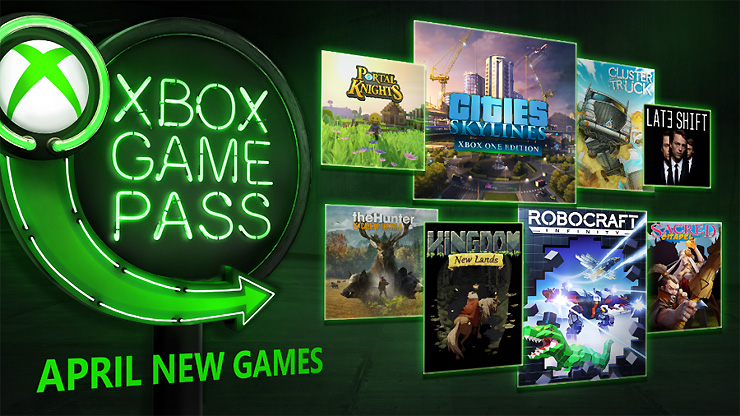 In Robocraft Infinity you are free to create, confront and destroy robots in Battle Arena or Team Deathmatch mode. Beat up on AI to polish your skills and then take on other players, leveraging a healthy mix of jet cars, tanks, flying warships, helicopters, drones, dinosaurs, scorpions to find victory – your options to build are virtually endless and no two battles are ever the same. Robocraft Infinity is Xbox One X Enhanced, with superior 60fps framerate and stunning 4K visuals. We can’t wait for you to enjoy Robocraft Infinity on April 11.

Cities: Skylines – Xbox One Edition, is an incredible simulation experience which puts you in charge of a growing city. From breaking ground on your first buildings and streets to efficiently managing the ever-changing needs of thousands of citizens. Design, build, and grow the city of your dreams, delivering important public services, establishing strategic civic policies, and challenging yourself to grow from a simple town to a bustling metropolitan hub. The Xbox One Edition includes the full original game and the After Dark expansion, allowing players to plan and design for their cities’ nightlife and tourist attractions.

The Hunter: Call of the Wild

The ultimate hunting experience awaits in The Hunter: Call of the Wild. This 50-square mile open world is home to a range of wildlife, from large majestic deer and fierce black bears, down to countless birds and critters. Dynamic weather, a full day- and night cycle and an immersive soundscape add to the experience, which is available in single player, or in multiplayer for up to 8 hunters. The Hunter: Call of the Wild is fully enhanced for Xbox One X with a range of impressive visual upgrades. The hunting experience is also ever-evolving, with a host of great free and paid DLC coming down the pipe, including the Siberian tundra in the massive Medved-Taiga National Park PDLC.

Are you looking for an excuse to get lost in an immersive world and sink way too many hours into an incredible strategy game? We thought so and we’re excited to announce that our friends at Raw Fury are bringing Kingdom: New Lands to Xbox Game Pass so you can do just that. Taking on the role of a monarch, your job is to build your kingdom from the ground up. Explore the land, recruit loyal subjects, and advance your economy and defenses. But make haste, for when nightfall comes, a dark and greedy presence awaits; if they get your crown, it’s all over!

We’re very excited to announce the award-winning adventure game Portal Knights is also joining Xbox Game Pass on April 1. Develop the greatest Portal Knight yet, leveling up your character, crafting epic weapons, and vanquishing foes in real-time in this cooperative, 3D sandbox action RPG. Explore dozens of randomly-generated islands and build almost anything! In a world torn apart by the Fracture and terrorized by the Hollow King, you and your friends are its only hope. Craft your adventure. Forge your hero. Become the ultimate Portal Knight in Xbox Game Pass.

You’ve played platformers before, but not all platformers are created equal. ClusterTruck is a new take on the genre, an engaging platforming experience that takes place on top of unpredictable trucks, barreling down a highway at high speeds. Jump and dodge obstacles through a series of insane levels where “the floor is lava.” The further you progress, the harder the obstacles and dangers become, with swinging hammers, powerful lasers and flamethrowers added. Because why not? Because ClusterTruck.

In Sacred Citadel, a side-scrolling action brawler from developer Southend Interactive, the once peaceful land of Ancaria is in grave danger and only you can save it. The evil Ashen empire has enslaved its population and is using the orc-like Grimmoc to wipe out the Seraphim, who swore to protect the realm. To defeat the empire, you must become the warrior Ancaria requires by riding terrifying mounts, acquiring earth shattering skills, looting powerful weapons and gathering valuable treasures. Grab your friends and join the resistance starting April 1!

Late Shift is an incredibly unique and engaging crime thriller from our friends at Wales Interactive. This cinematic live-action game is crafted by Michael R Johnson, who scripted the 2009 film “Sherlock Holmes” and features branching storylines with hidden chapters and over 180 critical decisions for you make. Your choices will have consequences from the very start, right through to the very end. One small decision could change the entire outcome in a choose-your-own-adventure style gameplay that can lead to one of seven conclusions.

Xbox Game Pass grants players access to more than 100 Xbox One and Xbox 360 games (177 as of April) for $10 a month -- you can check out a full list of available games here. In January it was announced all Microsoft Game Studios Exclusives, including major games like Sea of Thieves and Crackdown 3, will be available through Game Pass from day one.

What do you think of the April Game Pass lineup? Not the biggest month, but Robocraft Infinity looks interesting and Cities: Skylines comes highly recommended. For $10 you can’t go too wrong.