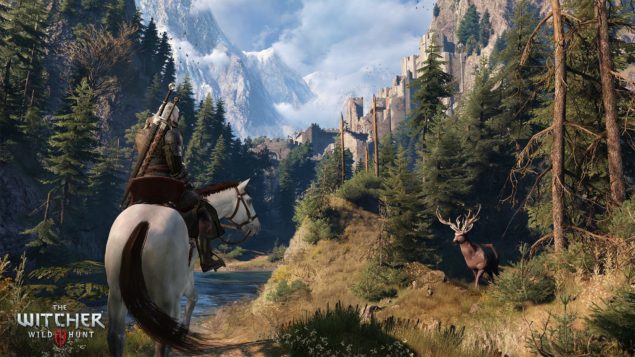 Asked on whether The Witcher 3 will feature big setpieces, showing battles, considering it is set during a time of war, Monnier replied:

There’s a war in the background. The example that you’ve given, I can’t really tell you anything, but we have some really epic… That word gets thrown around too much, but it truly is epic, it’s jaw-dropping, huge setpieces.

You’re thrown into this mess. The world doesn’t revolve around you, but you just get sucked into things.

When asked how much of the game we have already seen, Boiret simply stated:

It’s not even the tip of the iceberg.

Boiret continues to explain that when people play the game in the office, they still discover new things because there are gameplay systems in the game that are so organic.

Yeah, you have no idea. And you have no idea because we don’t have any idea. There are lots of gameplay systems that are so organic, that will work if you have multiple things happening at once. You know, monsters coming in, and humans joining in, and other things happening. It just works, but I’m never gonna sit down and test this in every single corner of the world. It’s too big.

It looks like The Witcher 3: Wild Hunt, will astound us when we actually get the chance to experience its vast world for ourselves.

With more and more interesting details being shared daily, it's hard not to get excited about the game. It has been one of the most anticipated titles of the last couple of years, and the wait will likely be worth it.

The Witcher 3: Wild Hunt releases on May 19 2015, for the PlayStation 4, Xbox One and PC. We will bring you any new information as soon as it becomes available. Be sure to check out our previous coverage for more information, here and here.