CD Projekt RED has recently owned up to the situation regarding The Witcher 3 downgrade subject and explained the sad truth of the nature of game development. Digital Foundry shared a video showcasing a direct comparison between the earlier builds demos of The Witcher 3, and the final game.

The Witcher 3 underwent a massive overhaul to its core rendering technology in order to deliver on the developer's vision for a dynamic open world.

CD Projekt RED made the mistake of presenting its vision of The Witcher 3 before it was actually functioning  as an open world title.

According to the team, the studio was not aware of whether their target was feasible with the open world nature they had envisioned. The 2013 trailer was advertised as in-game material at the time, and while it was partly true that the footage was indeed running the certain assets in real-time, it was not part of a complete open world scenario.

During the Microsoft conference at E3 2014, The Witcher 3 was demonstrated running on the "Xbox One" followed by a behind closed doors demonstration on PC. CDPR eventually released the footage publicly, allowing fans to get a glimpse of the actual code.

Certain changes were made from this demo in both positive and negative ways, such as geometry, lighting and color correction. Improvements include greater draw distance, additional foliage and stronger wind simulation. 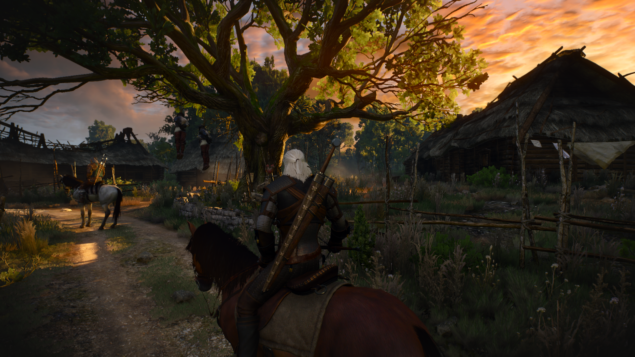 As we have previously covered a few adjustments in the ini files can improve the grass quality in The Witcher 3, as well as the performance. A workaround on how to run HairWorks on AMD GPUs without crippling performance, has also been made available, enabling AMD GPU users of enjoying The Witcher 3 with HairWorks enabled, while getting better performance than GeForce users not using a Maxwell architecture Nvidia GPU.

A set of beautiful 4K screenshots of the PC version and some 4K gameplay footage, demonstrates just how amazing The Witcher 3: Wild Hunt can look.