HTC Mazaa, a while back was one of those sensationalist devices with bloated specs. What made it wishful thinking rather than a realistic possibility? A presence of a 12MP camera. A 12MP camera is a bit of a rarity these days and the only phone I can think of from the top of my head is the stunning N8 (stunning camera that is). 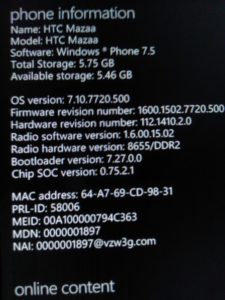 No longer a rumor, a member at XDA has posted a picture showing the "about" screen of a new phone he received from Microsoft as part of being one of the 50 lucky winners in the ongoing WPAPPITUP student developer competition. The phone indeed is a HTZ Mazaa running the retail version of Mango. That's just about it unfortunately. No word on the camera as of yet. According to him the phone bears start resemblance to the current HTC Trophy