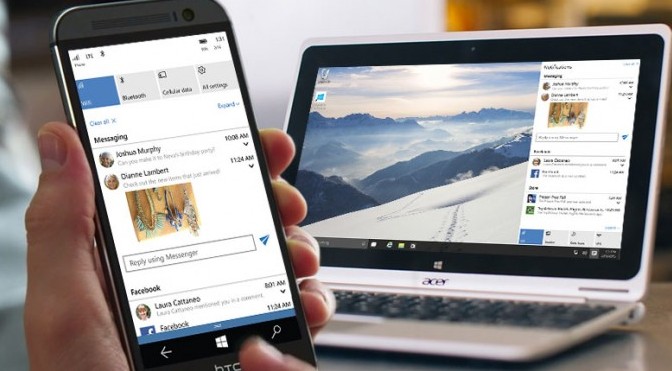 Microsoft has been focusing on its "Continue App Experience" that allows users to open an app on one device and continue on another device exactly where they left off. The feature works very similar to Apple's Handoff, which enables users to switch between between iOS and macOS without disrupting their workflow. But, Microsoft's implementation still needs a lot of work before it reaches out to public. New reports now suggest that the software giant is working on a major update for the feature that would release with Windows 10 RS2 in 2017.

Windows 10 cross-device synchronization of files, tabs and other items

When using Handoff, I appreciate being able to open a tab that I am reading on Safari on my iPhone directly on my MacBook by just turning on the Bluetooth. However, the functionality is still massively limited. It allows you to open an iPhone Chrome tab on your MacBook (opens it in Safari on Mac though). But, even with the same app, it doesn't offer you to open another tab while you continue to use the app, unless you close and open the app again on your iPhone. A truly synchronous experience would allow you to go beyond just the apps and make the transition between different devices really seamless with these problems ironed out.

WindowsCentral is now reporting that Microsoft is working on just that, expanding the feature to an entire workspace. This means users will be able to sync files and do more with this new feature releasing in Windows 10 RS2 in 2017.

The company is also looking at making the same feature be able to restore an entire workspace, all with the tap of a button. Cortana will be able to contextually sync files, tabs, apps and more between devices, with contextual pop ups that require the user to do very little work getting back into a productive state when moving between form factors.

The company aims to build this functionality called "Pickup where I left off" (aka "Flow") using Cortana, which appears to work like Google Assistant - something that binds the entire ecosystem together. "An app can simply handoff to Cortana for prompts and other tasks, making being able to sync a user's workflow between devices easier for developers and the user, as the user knows where to expect this functionality on every device they use," the report detailed.

Microsoft introduced the basics of its Continue App Experiences in Windows 10 Redstone 1. With Windows 10 RS2, the company plans on further expanding this feature to offer increased convenience and better productivity. Microsoft will release the new improvements to Windows Insiders in a preview build later this year. Public users would be able to receive it with Windows 10 Redstone 2 update in Spring 2017.