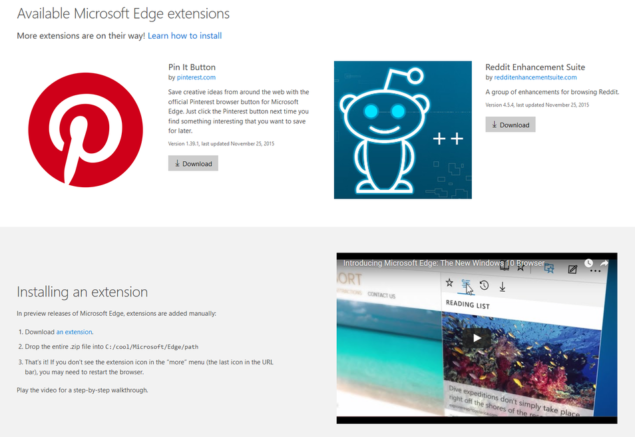 Extensions for Microsoft's Edge browser were planned to be released with the November update. However, they were pushed to until early 2016. Since Windows Insiders get to test the features before they are released to the public, releasing these extensions to Insiders mean Microsoft is also inching closer to publicly release the browser with extensions. Twitter user H0x0d found a dedicated page from Microsoft, which apparently wasn't yet ready for showtime. While this web page has now been pulled back by Microsoft, there are tons of screenshots already available.

The leaked web page doesn't look ready for the release yet as it contains several placeholder bits, build number, etc. However, it does show the early mock-ups of the extensions. Extensions for Pinterest and RES (Reddit Enhancements Suite) seem to be available "immediately" as the web page included links to these two extensions for Edge that could be downloaded right away (but won't work as yet).

Microsoft is rumored to release a Redstone build before the year ends. Looking at these extensions being ready for Microsoft Edge, the major update for Windows 10 might just be released to Insiders for it to be ready for public, early 2016. Releasing a new Redstone build will also ensure that developers get to work on extensions. You can also see in the web page that it is strongly geared toward developers who are part of the Windows 10 Technical Preview, as it include links to API documentation.

Extensions are here! Beginning with Build XXXXX in Windows 10 Technical Preview, a selection of extensions are available for Microsoft Edge… Maybe some text here about new extensions coming in future updates, and how you can get started on writing your own?

The extensions for Edge can be natively written or easily ported from Chrome. "Comparing Edge version vs. Chrome version of same extension, basically substitute "chrome" with "msBrowser", add few minor changes, done," explains H0x0d. It clearly suggests that it shouldn't take Edge long to play catch up with Chrome in terms of extensions support.