While Microsoft prepares itself to completely overhaul the user interface of its eighth generation Xbox One video game console and boost the system functionality with the New Xbox One Experience update, select preview program members are already testing the upcoming update. To give fans a look at how the system will look like for everyone later this year, Microsoft recently published a detailed video demonstrating important aspects of the upcoming update, and showcasing new upcoming features and changes. 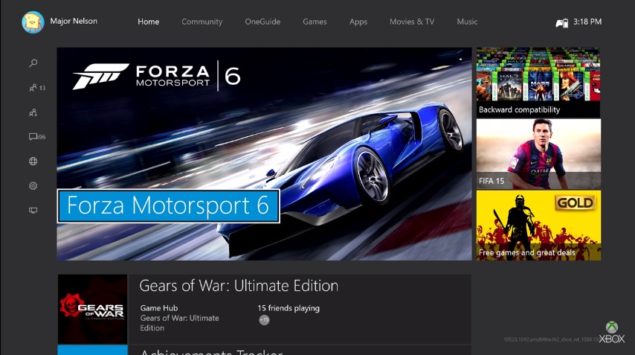 The 8-minute-long video that Microsoft recently published to show its fans how their Xbox One experience is about to change for good focuses on two main aspects of the upcoming update; the guide overlay and the main Home screen of the dashboard. In the video, Larry Hryb, director of programming at Xbox Live, sits down with the Xbox engineering team member Richard Irving to demonstrate new features and changes that the New Xbox One Experience have to offer. You can see that the Home screen looks quite different, but it still offers much of the same functionality as the one that is currently active.

The quick-access guide is where the real change is, with Irving saying that it is a "big focus for this preview release." The guide is now aligned to the left side of the screen, and can be accessed by scrolling over to the left side while on the Home screen, or double-tapping the Xbox button during in-game or any other activity. It provides players with quick access to their friends list, party, messages, notifications, settings, and other apps that players choose to Snap alongside their games.

Lary “Major Nelson” Hryb, throughout the video, points out multiple times how fan feedback has played a huge part in bringing about many of these new changes. However, the experience that preview program members are enjoying currently, and what you see in the video above isn’t necessarily how the final version of the New Xbox One Experience will be when it is released for all Xbox One users this November. A blog post on Hryb's site notes that the interface "is a work-in-progress and will undergo rigorous updating and polishing with the help of our Xbox One preview members."

In addition to the video, Microsoft also issued a warning to New Xbox One Experience preview program members, informing them that various games, features, and functionality may not work completely or at all during the preview period. As this is basically a beta test phase for the upcoming update, this comprehensive list of known issues does not come as a surprise. The list is quite long, and also warns that accessories such as Media Remote and some third-party racing wheels may not work. You can check out the full preview notes at the Xbox forums.