After launching the latest version of its widely used Windows operating system, Microsoft is now getting ready to roll out the “biggest update yet” for its Xbox One video game console this November. The ‘New Xbox One Experience’ will feature a completely redesigned dashboard, and players will be able to enjoy "the fastest and most social Xbox experience ever" alongside some great games releasing this Holiday season. The new update will not only make your Xbox One dashboard look pristine, it will also make some system functionality up to 50 percent faster. 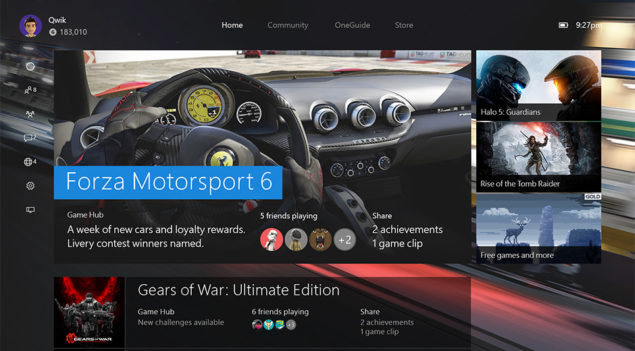 The upcoming Windows 10-inspired software overhaul for Xbox One will combine rejuvenated design with effectiveness and performance. That is according to Xbox engineering boss Mike Ybarra, who said that the New Xbox One Experience update will make some system functionality up to 50 percent faster. In addition, Ybarra talked more about the latest update during an appearance on the latest episode of Major Nelson Radio; a Podcast conducted by Larry Hyrb, director of programming at Xbox Live, that gives detailed insight into Xbox’s inner operations.

Ybarra stated that Microsoft tracked load time data for Xbox One, Xbox 360, and the New Xbox One Experience, and the results show that in some cases, executing tasks on the New Xbox One Experience is considerably faster. He vaguely stated that “popular gaming features” will load up to 50 percent faster, without explaining which features he is exactly talking about. In any case, Ybarra said fans can look forward to a “new level of speed and responsiveness” on Microsoft’s eighth generation Xbox One console.

Furthermore, during the podcast, Ybarra also talked about Windows 10’s upcoming integration with Xbox One. He said that bringing the latest operating system to the console is not as simple as one might think. Microsoft is apparently creating a highly customized version of Windows 10 specifically for the Xbox One console, and it is called OneCore. "Windows 10 for desktop PCs has incredible momentum right now," Ybarra said. "We're going to bring all of that efficiency to Xbox One."

The New Xbox One Experience is already available for some lucky testers. The update will be released for all Xbox One users in November. It will come packed with backwards compatibility for last-gen Xbox 360 games, a redesigned dashboard, a new community section and more. Microsoft Edge, the Windows-10 exclusive web browser that comes as a replacement for Internet Explorer, will also be part of the New Xbox One Experience, the developer confirmed recently on Twitter.

#AskMSEdge @SHarshaT Yes, Edge will be coming to Xbox One

Ybarra also teased that the update will introduce new "accessibility" features that will help the company to make sure the console can appeal to the widest possible market. These features are to be announced later.

How to Use Internet Explorer Mode in Edge on Windows 11