Still haven't upgraded your PC to Windows 10? Microsoft wouldn't stop haunting you until you do so. Determined to keep the adoption rate going strong, the company received some free advertising when it disrupted a live TV broadcast to push its Windows 10. 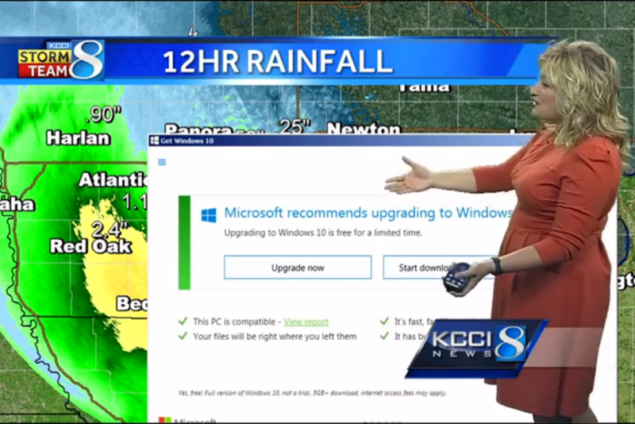 On Wednesday, a meteorologist was warning the residents of a thunderstorm when Microsoft struck with its own Windows 10 lightning. Keeping up with its tradition of nagging you with Windows 10 upgrade screen at the worst possible moments, the company managed to interrupt the live broadcast. If you think you are the one tired of all those Windows 10 nagware pop ups, ask the Iowa meteorologist Metinka Slate, when it interrupted her weather report.

“Oh, Microsoft recommends Windows 10,” she humorously said on camera, after noticing the message. Annoyed, Slate did handle the whole situation pretty well, but it proves yet again how the Windows 10 upgrade process consistently works as nagware. Even after hundreds of users have reported how annoying these tactics are, Microsoft is showing no signs of resigning. “What should I do?" asked Slate. Well, how about switching your operating system? Yes, that seems extreme and unlikely, but what are the options we are left with after almost a year of asking Microsoft to leave us alone.

For our readers, next time you feel super sick of Microsoft nagging you with Windows 10 ads, just remember that some people have had it worse. Many annoyed users on Twitter gave it another humorous touch showing that no matter what OS you are on or if you are just watching the weather report, Redmond will find you and nag you to the death of your current OS.

Microsoft offered Windows 10 as a free upgrade to Windows 7, 8 and 8.1 users for the first year of its launch. This July, the company is planning to drop the first major update to the operating system dubbed as Windows 10 Anniversary Update. While several users are waiting for this upcoming update to bring feature improvements and stability to the OS, Microsoft has done everything to push users to upgrade to the new OS, getting it to grab the position of second most-used desktop operating system.