With progress increasing on Windows 10 as the days pass, we're getting to learn more and more on Microsoft's upcoming operating system. By the looks of things so far, Microsoft's put quite an effort in Windows 10 and put some thought towards catering to the needs of all Windows users out there. We've managed to get our hands on Windows 10's graphics capabilities for all of you today, so take a look after the break to find out what Microsoft's anticipated operating system upgrade has to offer. 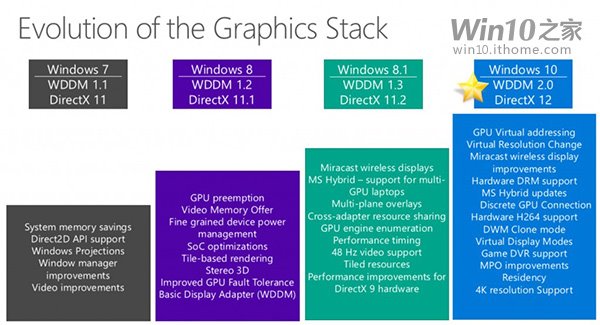 As we've told you earlier on several occasions as well, DirectX 12 will now be a part of Windows 10, as has been officially announced by Microsoft today in China. In addition to DX12 having made it on board, Windows 10 also features several more upgrades over Microsoft's previous operating systems, as can be seen above. The latest addition to the Windows 10 graphics platform includes hardware support for H.264, support for 4K, improved support for wireless displays through Micracast which adds on to Windows 10's cross platform functionality and Virtual Display support. 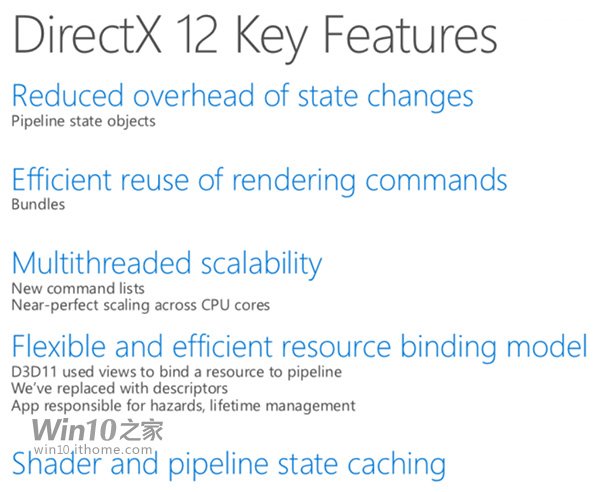 Courtesy of the Chinese, we can now take a closer look at what Windows 10, and its support for DirectX 12 on Microsoft's platform will bring. Things should start heading smoothly now, as GPU makers begin to roll out driver upgrades for DirectX 12 now too. DX12 features as debuted alongside Windows 10 can be seen above as well. Features such as muli-threaded scalability, shader cache and pipeline status and effective reuse rendering commands have made it on board. This added alongside Nvidia's confirmation for drivers for the DirectX upgrade, and Microsoft's announcement of limited DX12 support for DX11 cards paint a partly optimistic future for graphics indeed. Impressed? Disappointed? Let us know what you think in the comments section below. We'll keep you updated.

Buy Office And Windows Licenses From $6.14 During Keysfan Software Sale!