Windows 10 is currently sitting at a 57.83% of the market share despite Linux gaining ground. These stats have been published by Netmarketshare and do not reflect any increased adoption that could have been caused by the latest May 2020 Update since that was only released last week.

Last month, the web usage tracker had shared that Windows 10 was losing ground dropping from 57.34% to 56% even though Microsoft was saying that more people were using its platform than ever before during the ongoing lockdown. The loss was possibly due to Linux getting some more users, which has continued to attract new users in the last two months. 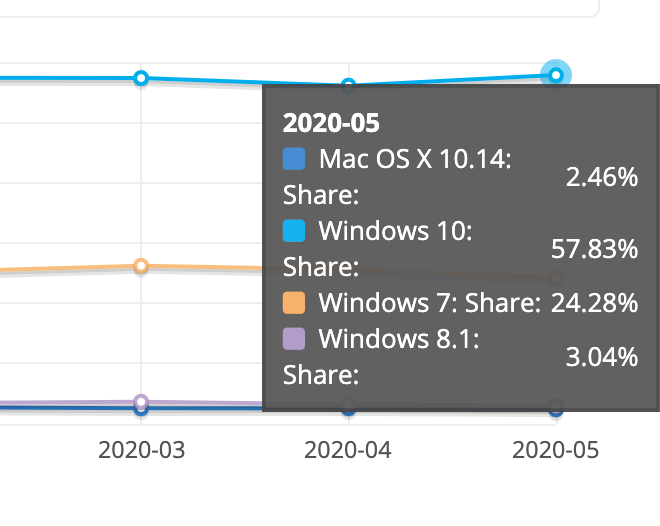 Windows 7 isn't yet ready to give up to Windows 10

While Linux may have given a slight headache to Windows 10, its biggest problem continues to be Windows 7. The expired operating system is now sitting at 24.28%, well ahead of all the versions and variants of macOS and Linux combined. However, the operating system does continue to lose ground, even if slower than Microsoft would have wanted.

It is also likely that a small portion of devices upgrading from Windows 7 are choosing Linux/Ubuntu instead of moving to Windows 10, even though the free upgrade offer is still valid for many.

It's worth mentioning that Microsoft's latest May 2020 Update, version 2004, comes with its own Linux kernel. For more details on what this newest version of the operating system is packing, check out our earlier coverage.

- Relevant: how to skip the line and install v2004 right away! (Beware of these known issues though)